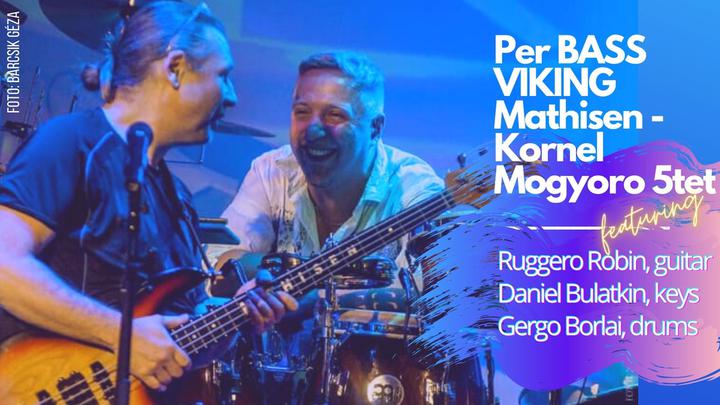 Per "The Bass Viking" Mathisen, legendary Norwegian bassist and Hungarian percussionist, Kornél Mogyoró – who has won the title of the best percussionist in Hungary 4 times – can now look back on a five years common musical history. Their joint venture began with the band “Per Mathisen’s Heavy Weather”, which has been active ever since, their 2018 album “Gratitude Overload” pays homage to the music of Weather Report and Joe Zawinul. Per and Kornél have performed with that formation on a number of occasions, gaining noisy success wherever they have been hitting the stage, including Porgy & Bess. In 2019 they performed with world star drummer, Gary Novak at the Budapest jazz festival and they have worked together with the fantastic keys man Janos Nagy, guitarist Mike Gotthard, drummer Utsi Zimring, keys man Paul Urbanek, sax player Gerald Preinfalk and drummer Herbert Pirker.

For the concert at Porgy & Bess on the 29th of March, 2021, they have invited 3 other genius musicians, Italian guitar guru, Ruggero Robin, the Czech Republic’s “Young Lion”, Daniel Bulatkin on keys and the Hungarian drum wizard, Gergo Borlai.

The music the Quintet will perform are mostly composed by Mathisen and Mogyoro, have extreme virtuoso approach, contains dynamics from the most lyrical acoustic landscapes to high voltage electric energy. The band is a powerhouse with jawbreaking instrumentalists whom delivers breathtaking solos and fantastic interplay.

Per Mathisen, aka. The Bass Viking, is one of Norway’s most in demand bass players, known as Norway’s answer to Jaco Pastorius on electric and to Niels Henning Ørsted Pedersen on upright acoustic. Per has performed in 40 countries worldwide with some of the most famous jazz musicians on the planet and released as many as 15 highly acclaimed CD’s and 3 DVD’s as a leader, co leader and producer. Alex Acuna, Gary Husband, Jon Christensen, Adam Nussbaum.

Ruggero Robin, recording artist, composer, bandleader, producer, from Padova, Italy. Ruggero is Italy’s jazz guitar guru with extreme sense of time and feel, a true virtuoso on the instrument. Released 10 CD’s in his own name and played with giants like Steve Gadd, John Patitucci, Trilok Gurtu, Joey DeFrancesco. He also has a long career in the pop/rock field and played with super stars like Zucchero and Andrea Bocelli.

Daniel Bulatkin is a 21-year-old keyboardist/pianist of Russian origin based in Prague, CZE. He is considered to be the youngest prodigy on the Czech jazz scene. Over the course of his very short career, he has become one of the most sought-after sidemen on the scene, be it on piano, the hammond organ or synthesizers. Collaborations: Tineke Postma (2x Grammy), Justin Faulkner, Ulf Wakenius, Gary Husband, Martin Valihora.

Gergo Borlai from Hungary is the new world star drum wizard who has grooves and techniques like a magician. Plays with all the greatest American stars and is hitting the road with Frank Gambale later this spring.