20:30
The show must go on(line) – Live stream with live audience 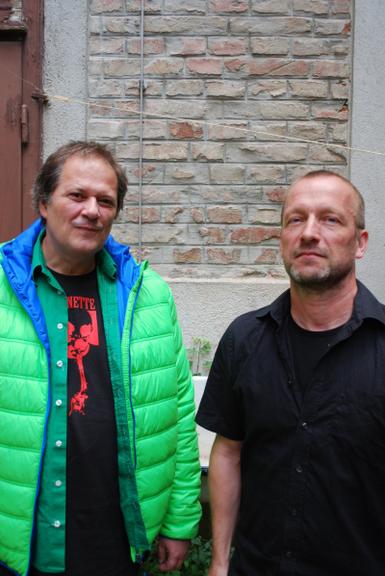 We switch over to "Now Live" from about 6.45pm and then a window opens automatically, where you can watch the concert free of charge and without any registration via Vimeo. If you want, you can support this project with "Pay as you wish". Thank you & welcome to the (virtual) club!

Since May 29th, we have been allowed to let (limited) audiences into the club in such a way that there is at least one meter between the seats. We have now tried out all possible seating options and believe that we have found a practical solution for almost 90 visitors. Secure tickets in time & welcome to the club!

The duo of “FALLING” – Kurzmann and Gustafsson – is dealing with improvised music, with roots and perspectives of many layers of previous and upcoming traditions. Being it improvised music, electro acoustic music, noise, free jazz, contemporary music, rock and more. In low dynamic territories of poetry and music is the music melting together into something where the unknown meets and transforms.

During the 1970s, Susan Sontag and Marshall McLuhan had the insight and foresight to correctly anticipate a future permanently altered by photography (Sontag) and the internet (McLuhan).  There have been many, many social and cultural developments in the last forty years, and not all of them have been as forward thinking as Sontag and McLuhan.  Looking at the state of global politics in 2016, the idea that there has been social progress in the last four decades seems, at best, questionable.  And, in retrospect, it would seem that the intersection between adventurous art and music with mainstream society was much more common in the 1970s than today.

In general, two art forms central to the cultural development of the 20th century- the cinema and jazz- have followed the conservative direction of contemporary politics.  Using the United States as an example- it is impossible not to be disappointed by Hollywood films being made now, particularly when compared to those made forty years ago (The Conversation, Dog Day Afternoon, The French Connection, MASH, The Last Detail, Dawn of the Dead,  Taxi Driver, Badlands, A Clockwork Orange, Two-Lane Blacktop...); and it is questionable if the perception of jazz as an open-ended art form, rather than a musical style, will ever recover from the neo-con movement that began during the Reagan era.  Today's creative impetus often seems to be more concerned with replicating an idea of the past instead of pushing against it.

There are certain individuals, however, who have concentrated on what has actually been developing outside the (now global) mainstream during the last decades, artistically and otherwise.  Christof Kurzmann and Mats Gustafsson are two of these people.  As musicians, they have remained focused on contributing to the contemporary scene, always looking for new ways to challenge themselves and to develop original methods of construction for their work.

One result of their research is this set of duo recordings.  I find them to be statements that indicate ways in which it is possible to make music that belongs to this epoch and not the last.  On the surface, its fundamental components seem to come from the 20th century: the saxophone (invented in 1846, but not coming to the fore until jazz and Coleman Hawkins took a hold of it), the laptop computer (initially developed around 1980), and tape music (first started around 1950).  But when examining the materials it becomes quickly apparent that, though the "machines" may belong to the previous century, the methodologies applied to them do not.

The six pieces on this album began as open improvisations digitally recorded at Martin Siewert's studio in Vienna, Austria.  A section of each improvisation that was considered most successful from a musical standpoint was "spliced out" and kept as a composition- the studio was used as a means to produce a performance rather than to strictly document, not usually the case when recording improvised music. Mats Gustafsson (who also plays electronics here) has added to the range of extended techniques for saxophones instigated in the 1970s, by musicians like Anthony Braxton, Evan Parker, Roscoe Mitchell, Trevor Watts, Steve Lacy, and Peter Brötzmann.  He's developed these through his unique approach to the instruments, which is often built upon phrasing power that can stand up to rhythmic frameworks and volume that frequently have little to do with the origins of improvised music.  In many cases, the grooves explored on this collection of recordings are about pulse, but not the rhythmic feel of jazz, nor the timing of late 20th century free improvisation.  And as Christof Kurzmann (who also sings here) explained to me, the instrument he plays is not the laptop, but the software that he runs on it, called PPOOLL and refined by Klaus Filip and Arnold Habirl in 2015, as a reworking of their earlier LLOOPP software.  Put simply, PPOOLL gives Christof nearly infinite manufacturing possibilities for sound- from creating new material that's used later in performance, to processing sonic events in real time.

The elements of construction used to make this album and the resulting music all belong to this century, to this period.  I think it's clear that Christof and Mats are not looking backward in an attempt to recreate something that sounds like the past, nor do I feel that they are attempting to be futuristic and artificially avant-garde.  FALLING and five other failings is a set of music that responds to the circumstances that we are currently living in, what we are seeing and listening to right now.  Compositions for the times.  As I hear them, abstract hymns for the left as we are faced with the advance of the right. (Ken Vandermark: June 15, 2016, Vienna)