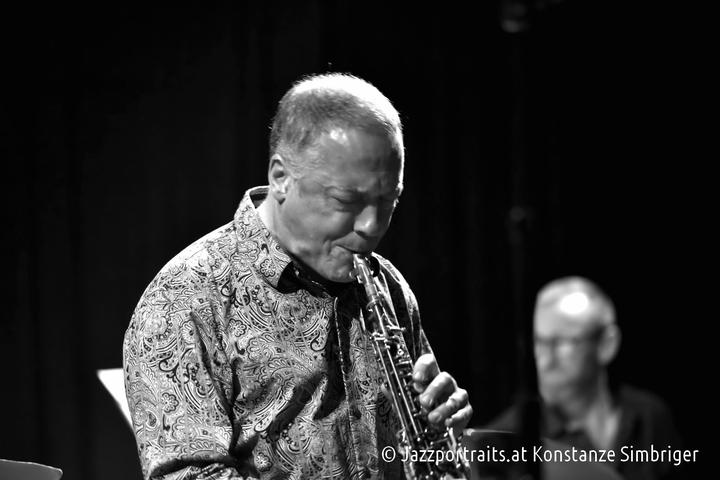 The FREEDOM QUARTET is a new band reflecting Middleton’s vision of creating music on the highest levels with a group of masters of improvisation. Middleton’s love for the freedom of line, rhythm, sound, possibility and spontaneous creation finds expression with this exceptional band of European players that opens a new chapter in his career.

ANDY MIDDLETON is one of the top-tier saxophonists and jazz composers living in Europe today. “One of the strongest tenor and soprano saxophonists on the scene,” says Randy Brecker, Andy is a skilled improviser and composer whose breadth of expression ranges from fierce power to tender warmth, from lyrical beauty to rhythmic drive, which sounds contemporary and fresh while retaining a real sense of the saxophone lineage. His compositions, harmonically modern and melodic yet clearly rooted in the jazz tradition, provide the perfect setting. Middleton’s unique voice as a player, arranger and composer has led jazz icons such as Ralph Towner, Kenny Wheeler and David Holland to collaborate with him. He has also performed and recorded with a long list of artists including Billy Hart, Maria Schneider, Richie Beirach, Renee Rosnes, Randy Brecker, Bob Mintzer, Ron McClure, Bill Evans, Lionel Hampton, Joey Calderazzo, John Abercrombie, Steve Rodby, Scott Colley and Adam Nussbaum. Middleton has received numerous prizes and awards, among them First Prize, Best Soloist, Best Arranger at the 13th Europ’ Jazz Contest, Belgium (1991) as well as Outstanding Jazz Soloist in Down Beat Magazine (1987). “… solos that demonstrate the absolute mastery of his saxophones, in emotional and technical terms. Every note hits the mark, but also reveals the notable feature of leadership, that nothing is done halfway.” All About Jazz Italy

Piotr Wojtasik is a trumpet virtuoso, a great improviser and composer who has been speaking his own unique musical language for over 30 years. He has recorded and performed in most European countries, in Morocco, Israel, Canada, the United States, Japan and India as well. In the 1980s and 1990s he represented the trend of modern bop but now has adopted a more individual form, based in part on modal jazz with elements of free and ethnic music. He has performed with some of the giants of jazz, including Kenny Garrett, Joe Lovano, Billy Harper, Victor Lewis, George Cables, Kirk Lightsey, Joe LaBarbera and Archie Shepp. Wojtasik has taken part in the recording of over a dozen albums. He has recorded 11 original albums which have gained high recognition among critics and music lovers. The albums "Circle" and "Hope" received the prestigious award of the Polish music industry - Fryderyk, and most of his albums have been nominated to it. Wojtasik himself received two Fryderyk Awards in 2008 in the Jazz Musician of the Year category and as the author of the Best Jazz Album of the Year, for the "Circle" album. He won the Jazz Forum magazine many times in the Jazz Top ranking. The latest album, "To Whom it May Concern”, shows Wojtasik's sensitivity in both the performance and composition as well as in the carefully selected cast of musicians.

Since 2003 acoustic bassist Peter Herbert has been working and living in Paris and Vienna after 16 years in NYC and plays an average of 100 concerts a year with about 100.000 miles of annual traveling distances. As a much in demand ’sideman’ he collaborated in the past with musicians like Marc Copland/John Abercrombie Quartett, Bobby Previte's "The Horse", John Clark Octet, Robin Eubanks 'Mental Images’, or Marcel Khalife. His work has been well documented on well over 160 CD-recordings (incl. Paul Simon). Peter Herbert is also a versatile composer with works for various orchestras and chamber groups like the
Ensemble Plus, SOV, the Absolute Ensemble in NYC, and a recent work is his opera ‘Trans Maghreb’ for the Bregenzer Festspiele 2014. He established his own Internet-based label Aziza Music in 1999 (www.azizamusic.com). Since 2007 Herbert has been teaching bass, improvisation and composition at the JIM at the Anton-Bruckner Privat University in Linz, Austria.

His unique style made Wolfgang Reisinger Austria's leading drummer and one of the most significant European percussion instrumentalists. He combines the sensitivity and awareness of a European background with the flexibility of his American instrumental colleagues. His musical expression reaches from classical percussion to the mastery of the drumset and into the
world of electronics. Both influences - contemporary music and jazz - can be heard in his project "Extended Solo Drumming" that combines drums, orchestral percussion and live electronics. In 1979 Wolfgang joined the newly formed "Vienna Art Orchestra“ as percussionist and drummer and stayed with the band for ten extremely successful years. At the same time a close collaboration with the outstanding guitarist Harry Pepl and saxophonist Wolfgang Puschnig led to the legendary bands "Part of Art" and "Air Mail“ and the early rap/jazz/pop band „Pat Brothers“ with electronic mastermind Wolfgang Mitterer. Through his classical background that kept him in touch with composers of Contemporary Music Reisinger also worked as a soloist with composers Beat Furrer, Thomas Pernes, Bernhard Lang and Luciano Berio as well composed and produced music for theatre and film. He has performed and recorded with many musicians of the international jazz scene like David Liebman (with whom Wolfgang recorded his highly acclaimed 2006 album „Refusion“) , Joachim Kühn, Louis Sclavis, Marc Ducret, Michel Portal, Enrico Rava, John Abercrombie, Jasper Van´tHof, Michel Godard, Roscoe Mitchel, Evan Parker and Steve Lacy.