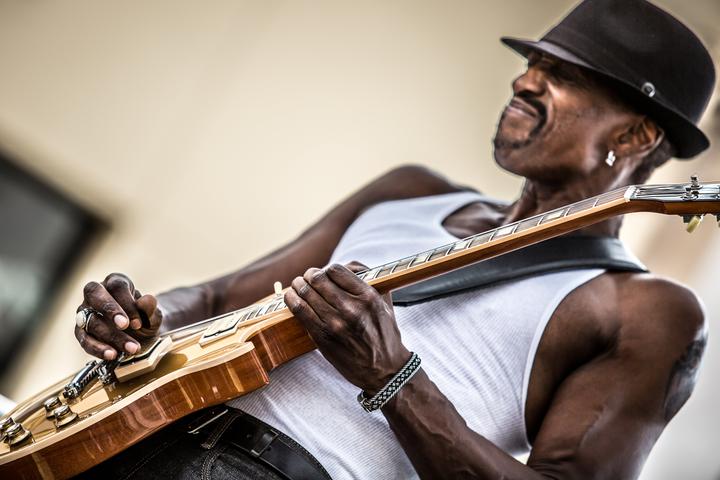 "Blues music is my therapy. Writing songs has a way of helping me understand, and deal with, life, love, and loss."

Sizzling hot guitar solos. Smooth and soulful vocals. High-energy stage performance. Backed by a rhythm section that is second to none, this IS Dennis Jones. Jones was born in Baltimore, Maryland. The drums were his first passion and they still form his relentless grooves. Check out a live show, and you’ll instantly agree, Dennis Jones’s band ROCKS the blues like NO other! With original songs, some of which are sure to become classics, Dennis’s feet are firmly rooted in the past, yet his heart and soul are connected to the present. He writes songs that seamlessly blend the best of both worlds, presenting a unique and contemporary style of American rock and blues. And unlike some others, he isn’t afraid to tackle the controversial issues of today. Since 2003, Dennis has released five successful albums on his own label, Blue Rock Records.

Based in Los Angeles, Jones continues to pursue his musical goal of becoming a top entertainer in his field. With four well-regarded CD releases and the fifth “Both Sides Of The Tracks,” (2016), Jones' vision has never been more in focus. Dennis is no stranger to film either. Deep Blues from his first CD, Falling Up, was featured in a 2006 Lions Gate movie, Sea of Fear. Finally, Dennis is one of several artists featured in the much-anticipated Babe’s & Ricky’s Inn and "Mama" Laura Mae Gross. He opened for such greats as Johnny Winter, Dick Dale, and the Experience Hendrix Tour. Dennis won the International Blues Competition, Memphis, 2004, as part of Zac Harmon’s band and in 2012, was honored to present the Awards for BB King Entertainer of the Year. Dennis and his band continue to work hard to achieve the next level of musical success. Increased touring opportunities and greater exposure to new fans will undoubtedly make this band a household name. The power trio of Jones’ has long been a foundational lineup in rock ‘n’ blues paths released the album, “WE3 Live” (2018). Upon returning from another successful European tour with his power trio, Dennis Jones dove headlong into songwriting for his seventh album. The stalwart singer, songwriter, and guitar slinger crafted another set of tunes showcasing his musical dexterity and poignant worldview. The title references the dynamic range of the trio, who can go from a whisper to a scream, Soft Hard & Loud (2020).