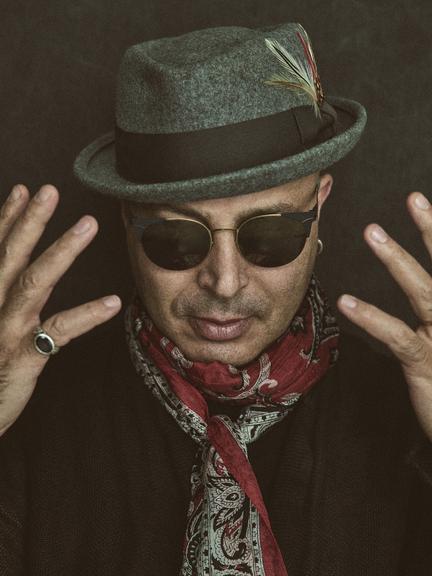 “Foreign affair” was a carte blanche given by Porgy and Bess to Dhafer Youssef in 1997. At that time Dhafer Youssef was a young man who had moved to Vienna with the ambition to complete his musical training. The creative exaltation provided by multiculturalism in Vienna and the multiple encounters he had there opened a new world of possibilities to him.
Seduced by jazz and other musical genres such as Indian music, he took part in numerous jam sessions and encounters at different bars and clubs with for instance Wolfgang Puschnig. He finally met Gerhard Reiter, the Austrian percussionist with whom he founded his first band Zeryab. In 1996 his multiple discoveries and experiences in Vienna gave birth to his first album “Musafir” (“The Traveller” in Arabic). This album is the result of an atypical encounter with Anton Burger, Achim Tang, Jatinder Thakur and Otto Lechner. He presented his project at Porgy & Bess, the renowned Viennese club. After a successful first night he was offered the carte blanche “Foreign Affairs” and started a series of monthly concerts at the club. There he met Nguyen Lê, the French guitarist of Vietnamese origins, or the Italian trumpet player Paolo Fresu, who invited him to several performances throughout Europe. It was a huge success.  Dhafer gained in maturity over the concerts and confirmed his musical project. That was the beginning of an authentic musical identity impregnated with the artist’s origins without falling into typical Orientalism. A wonderful career started and the Oud master vocalist and composer played with musicians from every corner of the globe including Herbie Hancock, Zakir Hussain and others.
Dhafer Youssef is at the vanguard of a movement in contemporary music that brings East and West together. He is one of the most inventive Oud players worldwide and has succeeded in freeing the instrument from its traditional role and bringing it to jazz. An ode to friendship , to the city of Vienna ‒ today we are presenting the “Foreign affair suite” at Porgy & Bess.
“… when Christoph gave me the carte blanche, he gave me life. At that time I was a poor kid, cleaning windows for a living, trying to survive in the city and make my dreams happen. I was working the whole month and waiting for Sunday night to go on stage and share my story through music. This experience was a life experience. What I got from it was the equivalent of maybe ten years …” (Dhafer Youssef)

A carte blanche with concerts, delivered by Dhafer Youssef with different themes and different line-ups. Join the celebrations!!!