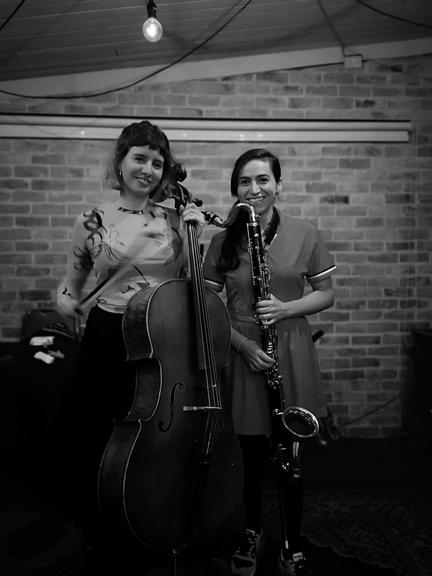 La Tortuga Alada (The winged turtle) is an imaginary animal whose particular anatomy draws us to an ambiguous being that scurries restlessly and, at the same time, achieves weightlessness. In these two antipodes is the musical project created in 2017 by the Colombian saxophonist and clarinetist María Valencia and the Argentine cellist Violeta García, who exceed the rigorousness of jazz and contemporary chamber music, placing their explorations at the limit of improvised music and instant composition. In that place of free forms, risky soundscapes and real-time dialogues, was born Cuadernos de Viaje Nº 1, a recording made in Bogotá, Colombia, on January 26, 2018, and released by Discos Chichigua. Between 2018 and 2020, the duet traveled from one place to another and performed, among others, in two emblematic spaces of the Latin American experimental scene: Roseti (Buenos Aires) and Matik-Matik (Bogota). In those same cities and before the obligatory hibernation of the pandemia, they recorded Cuadernos de viaje Nº 2, their second album, which continues the exploration of spontaneous music that gravitates between melancholic atmospheres, frenetic conversations and sound vignettes that could well be the soundtrack of expressionist short films. In addition to the visual support -by the Brazilian illustrator and double bass player Manu Maltezthe album also includes "Sinalefa hacia el Sur", a telematic improvisation piece featuring the participation of four restless improvisers: the Colombians musicians Ana Ruiz Valencia and Juliana Gaona -who play the violin and oboe, respectively-, the Argentine saxophonist Camila Nebbia and the Brazilian accordionist Lívia Mattos. Thanks to the grant received by the Ibermúsicas program, Cuadernos de viaje nº 2 will be released at Le Périscope, Lyon, on September 28, 2022. For this special occasion Violeta and Maria will play together with their Norwegian friend and bass player Ingebrigt Håker Flaten. The album will be part of the catalog of two independent record labels who are also friends, accomplices and partners of Tortuga Alada: the Norwegian Sonic Transmission Records and the French label Dur et Doux. Thanks to the crossings, ties and friendships through music, María and Violeta have met Ingebrigt Håker Flaten (director of the Sonic Transmissions label), and Clément Dupuis director of Dur et Doux), and thought of the idea of creating alliances that would strengthen these ties. Thus arose the idea of releasing this album collectively with these two labels, an act that transcends the idea of an economic alliance and strengthens, instead, the bonds of friendship. (Pressetext)

Gus Loxbo is active in the Swedish jazz and experimental music scenes. Playing double bass, guitar, saw and electronics in groups like Pombo and Silence Blossoms with a number of record releases in his catalogue (including on his own record label). He also acts as a composer in electronic acoustic music where he is happy to collaborate with theatrical expressions such as theater, dance and performance. Gus has a broad musical background with education in improvisation and jazz (Royal Academy of Music, Birka fhsk), classical technique (Icelandic Academy of the arts) and electroacoustic composition (EMS, Kappelsbergs fhsk). In the solo debut "Trådknaster" we got to experience these elements intertwined into one organic body. "Loxbo balances cleverly and organically his extended bowing techniques, the dark and woody, vibrating sounds of the double bass and brief silences to sketch fragile and tentative sonic images and stories" (Eyal Hareuveni, freejazzblog 13/1-22)