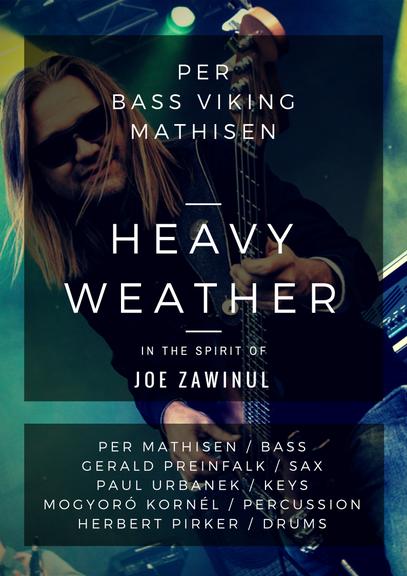 Norwegian bassist extraordinaire, Per Mathisen, has brought together this wonderful international ensemble of fantastic musicians, to celebrate Joe Zawinul’s birthday on the 8th of July. The band will perform some of Zawinul’s compositions, written for the most successful jazz band ever in the history of music, “Weather Report”, tunes composed by 2 of the most important members of the band, Jaco Pastorius and Wayne Shorter and in addition, some originals written in honour and in paying tribute to those giants, by the hand of Per Mathisen.

The concert is in the true spirit of Zawinul with amazingly virtuosic musicians making a firework of musical energy, dynamics and joy, celebrating his grand legacy to the world of music.Per Mathisen, (aka. “The Bass Viking”) is one of Norway’s most in demand bass players, known as Norway’s answer to Jaco Pastorius on electric and
to Niels Henning Ørsted Pedersen on upright acoustic. Per has performed in close to 35countries worldwide with some of the most famous jazz musicians on the planet and released as many as 11 highly acclaimed CD’s and 3 DVD’s as a leader, co leader and producer. His long time collaboration with “Weather Report” legend,
drummer / percussionist, Alex Acuna, in the trio “Acuna / Hoff / Mathisen”, is world renowned and was resulted in two CD’s: “Jungle City” and “Barxeta” plus one DVD, “Live at the drumchannel”.

Gerald Preinfalk, an incredible versatile sax player which has a fantastic double carrier as a contemporary classical and jazz musician, recording artist with own CD releases.

Paul Urbanek, keyboard player that truly goes in the footsteps of Joe Zawinul, recording artist with own CD releases.

Kornél Mogyoró, the greatest percussion player to ever come out of Hungary. Played on countless albums and with all the great artists in his home country and many internationals.

Herbert Pirker, by far the busiest drummer in Austria and one of the most talented ever, performed in many different countries and also is a producer.