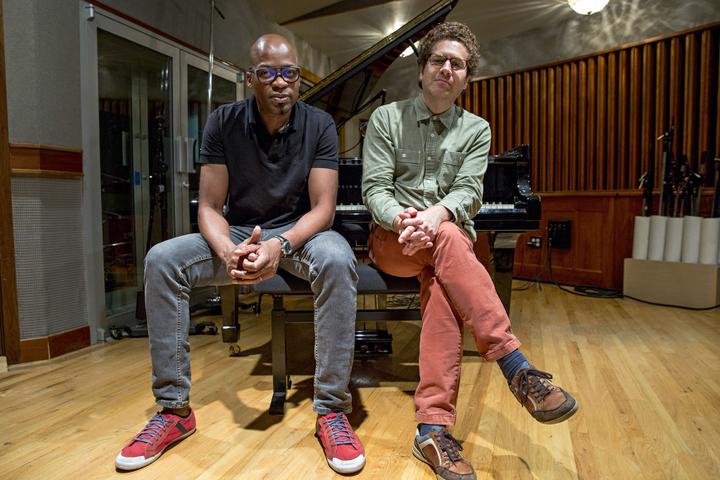 The idea of ‘hope’ serves as both the namesake for the duo collaboration of acclaimed musicians Kevin Hays (piano) and Lionel Loueke (guitar), and as the title of their record (Hope, Newvelle Records). Born and raised on opposite sides of the Atlantic – Loueke in West Africa’s Benin, Hays in Connecticut, USA - Hope simultaneously explores their cultural influences, and transcends their differences, complementing each other into a singular, organic voice. Possessing an undeniable chemistry, the duo’s synchronous interplay is both playful and poignant, with a resolute lyricism and warmth.

Tension in music often leads to some of the most rewarding recordings and performances – when there’s cross-talk around who should take the lead, when someone is pushing and someone else is pulling, when the band isn’t resting in the beat but subjugating it. Duke Ellington’s great 1962 trio recording, Money Jungle, featuring Max Roach and Charles Mingus, was famously tense. You can hear it in the way Roach and Mingus are constantly snapping at each other, but their respect for Ellington takes precedence and leads to one of the finest trio records ever made.

Lionel and Kevin don’t need to find a balance between them because they are both serving something else. Whatever you want to call it -- “truth,” “higher power,” “music” -- that’s the third party here. I’ve been blessed as a musician and a producer to witness some incredible and even historic music. I’ve never been around anything like when Lionel and Kevin stepped into the studio.

Chemistry is a strange word for it. What microcosmic reactions are going on here when two musicians connect so viscerally? Often musicians talk about “feeling time” the same way. Can there be a blunter description of a fundamentally mystical idea? Lionel Loueke’s home country of Benin in West Africa is a long way from Kevin Hays’ hometown of Greenwich, Connecticut. Is there a deeper truth that they’ve both discovered?

The compositions on this record have their own synchronicity as well. Violeta was written by Kevin for the great Chilean singer, musician, folklorist and composer Violeta Parra. Kevin first heard Parra on a recording with the iconic Brazilian singer Milton Nascimento, immediately fell in love with her voice and dedicates this song to her “great spirit.” Hope was written by Lionel during a difficult time in his life. Lionel said, “Hope kept me alive,” and describes the song as “another song for peace and love.” As for Aziza Dance, he remarks: “Aziza is a little creature you can find in the forest if you are lucky, the god of inspiration in Beninese mythology.” Feuilles-O is a traditional Haitian song that Kevin fell in love with and arranged (that’s Kevin singing the melody in Haitian Creole). The song is about a medicine man healing a sick child.

Hays’s Miltonwas written for and inspired by Nascimento, whose influence is clear in the falsetto intro, driving 5/4 rhythm and contagious exuberance. Twins was written by Lionel for his friend, the producer Mikele Locateli, when Mikele had twins, but it’s also about the “deep connection you can have between two people.” Veuve Mallienne, which means “Malian widow,” is a cry from a wife who lost her husband to war and a demand for peace. Kevin actually wrote lyrics to All I Have, which speak “of the discovery of the wealth of spiritual truth that's always there, but often gets obscured by our involvement in things of the material world and our (even more often) cluttered minds.”

There’s a commonality of intention and inspiration here. A search for—or rather, a reliance upon—something beneath the surface. This is, of course, something that is represented and searched for in all music, not just improvisational music, but the connection between Lionel and Kevin is so clear and warm that it is hard not to try to understand it. For these musicians who grew up across the globe from each other, to pull at the subterranean strands of connection, expose them to the world, and turn them on so they glow and illuminate -- this is fundamental to the very idea of “hope.” For whether you find solace in the divine, the spiritual or the human, it’s this sort of communion that we’re all searching for, and relying upon. (Elan Mehler)