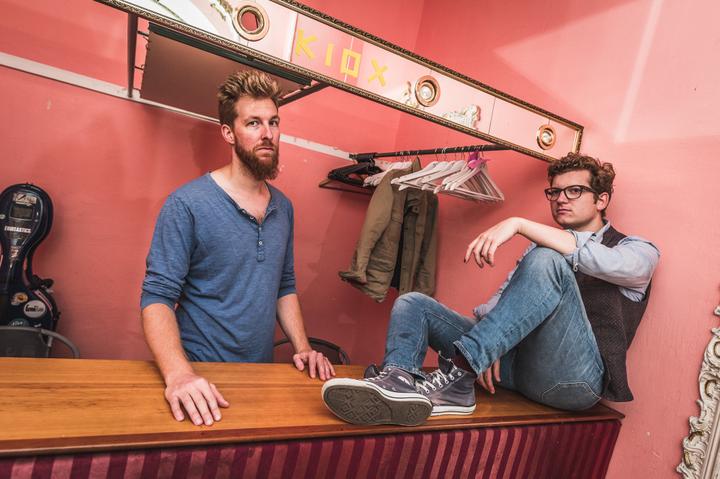 Sain Mus
Sain Mus – a duo that has musically dedicated itself to creating idiosyncratic soundscapes, while exploring its instrumental possibilities in a gripping and soulful manner. Philipp Erasmus (guitar, electronics) and Clemens Sainitzer (cello, electronics) – the two heads behind this duo project – refuse to confine themselves to any musical standards and rather focus on producing exciting new sounds from supposed opposites. The two musicians are masters in creating both beautifully elegant and dreamy lyrical music, as well as wildly dissonant, high-energy, dramatic and more progressive sounds. The duo also does not shy away from the free form of play. Celebrating the vast spectrum of musical diversity, the pieces of the duo range from chamber music to modern acoustic songwriting, rock, blues, folk and jazz. Definitely top of the line.

Rdeča Raketa
Rdeča Raketa is characterized by a high degree of individuality which is dedicated above all to the artful examination of the phenomenon of sound. What is presented by the twosome appears like a machine that has become a pulsating sound structure, constantly busy with itself in the context of electro-acoustics, creating sound collages shimmering in threatening and gloomy colors. Questions about any stylistic positioning into a certain musical category are basically obsolete, since the Viennese twosome defines itself within a tonal space in which traditional or any other notions are no longer really effective. Rdeča Raketa create a cinematic sound painting one simply has to deal with.

Purple is the Color
Jazz music of a tremendously elegant quality, the kind that does not linger in the classical realm, but rather unfolds many interesting interconnections to other styles. Purple is the Color under- stands how to build bridges and translate various elements into its own sophisticated musical language. The aim of Simon Raab (piano), Štěpán Flagar (saxophone), Martin Kocián (bass) and Michał Wierzgoń (drums) is to touch the audience with their music, release deep-rooted feelings and trigger emotions. Beautiful melodies and harmonies that create a continuous arc of suspense, passionate and playful passages that consistently open the space for experimental and weird sounds, calm sounds that gently caress the listeners with an invitation to dream, spontaneous twists and turns that lure to other trails, and, and, and. Purple is the Color hit the exact tones that flood the soul and persuade listeners to completely indulge in a musical spectacle.