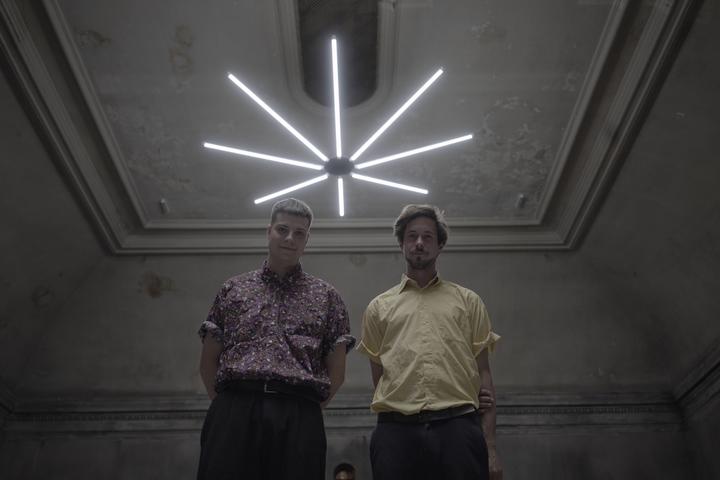 Around 8 p.m. we switch to “Now Live”. A window will open and you can watch the show via Vimeo – free of charge and without signing up. You can support this project via “Pay as you wish”. Many thanks and welcome to the (virtual) club!

As of May 29th we are allowed to invite a (limited) audience to the club, if a minimum distance of 1 meter between seats is guaranteed. We’ve tested a lot of seating variations and are convinced we have worked out a practical solution for almost 90 spectators. Please make sure to get your tickets in advance – welcome to the club!

“What Do You Want to Be When You Grow Up?”
Their debut album has already announced itself by several singles: "To Postpone A Dream" (releases August 30th, 2019, Kleio Records) will be the name of the first longplayer of the Viennese Post-Rock / Dreampop duo MELA Simon Bauer and Marius Grimminger produced by Peter Paul Aufreiter (Hearts Hearts).

After their two self-recorded EPs "default millions" and "Anxiety", Simon Bauer and Marius Grimminger, aka MELA, work with producer Peter Paul Aufreiter (Hearts Hearts) on their upcoming album "To Postpone A Dream" (August 30, 2019, Kleio Records). The Viennese duo with its German roots impresses particularly with the combination of its well-proven strengths: wide Post-Rock soundscapes and Dreampop beats, which invite one to dream and lose themselves, presented almost exclusively in falsetto, fragile voice of singer Simon Bauer skillfully in scene.

With anxiety as the overall topic of the last EP “Anxiety”, “coming-of-age” enters as the thematic superstructure of “To Postpone a Dream” in the center of consideration, which the single-releases “Ravine” (puberty), “Treehouse” (Childhood) and “Bengal Lights” (“growing up”) already underlined. The band pulls their lessons from their own history and does so with a message to the audience.

“What do you want to be when you grow up?” Man strives for all sorts of things in his life, but one of the first questions we ask ourselves is preceded. At a young age, one is confronted with the search for one's own purpose in the world. MELA conjure up the focus on this search and doesn’t want to arrive too fast. Deceleration, daydreaming, and, living life in the moment are the keys to happiness for MELA. "To Postpone A Dream" wants to be the soundtrack for just that and offers a versatile tracklist that ranges from the thoughtful "White Seagull" on the mystical "Morals" to the catchy "Crystalline". The band manages to provide the right moments for excitement and relaxation via the twelve-numbered LPs, making their debut album a pleasant listening experience with replayability.

The abandoning of a classic rock band cast led to the now fruitful collaboration of the two young Germans who chose Vienna as their home country and founded their sound here. Through exhaustive tinkering, in 2015 the two of them created their memorable interpretation of Post-Rock and Dreampop by synthesizers and electronic beats for the first time. In the studio still as a duo, MELA are now on-stage with a drummer on the road and obtain a punchy live show that is in no way inferior to the "on-record" experience. With "To Postpone a Dream" they release their debut album with the young Viennese indie label Kleio Records (i.a. Please Madame, Listen To Leena).