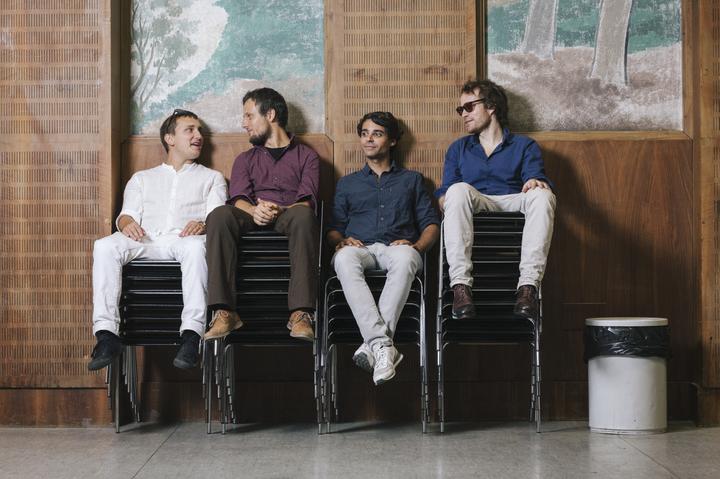 Sketchbook Quartet
Listening to the tracks of Sketchbook Quartet, there is definitely an initial element of surprise. Oh, so this is also how jazz can sound like! The music of the experimental friendly Viennese quartet has little to do with jazz in the classical or traditional sense. Not only is the lineup of Sketchbook Quartet rather unorthodox, but the music and sound of Leonhard Skorupa (saxophone, clarinet), Daniel Moser (bass clarinet), Andi Tausch (guitar) and Konstantin Kräutler (drums) is also quite unusual, idiosyncratic and untypical for the genre. The quartet approaches jazz from a completely different direction, which – in its broadest sense – can be attributed to post-rock. The music is all about the mood and atmosphere, creating tension that is constantly increased, until it finally reaches its climax with a big bang. Marked by an abundance of warmth and beauty, the music of the quartet hits a captivating tone of jazz that invites the listener to immerse into the music and drift through the sonic events.

Sophie Abraham – Cello Solo
In her first solo cello program Sophie Abraham combines elements from classical pieces with her own compositions. Musically she expands the sound space of the cello with her voice, her languages (Dutch, German, English), with loops, montages and overlays. The result is a highly interesting, sophisticated, extremely complex and very independent sound space in which the expressive possibilities of the cello are expanded. The musical openness of the cellist and her love of diversity are the basis for a program that is characterized by strictly composed pieces and a strong tendency towards spontaneous improvisation

Tubonika
A young talented duo with the successful approach to redefine the traditional folk music sound and in doing so, igniting an infectious musical firework. The Styrian duo Tubonika is on a quest to create something out of the ordinary and has found its destiny in the connection of the old with the new. Respectfully breaking with tra- dition, the two young musicians Jonny Kölbl (harmonica) and Tobias Weiß (tuba) are bringing back old traditional folk music sounds into the now, while mixing it with elements from other music forms and styles. The pieces of Tubonika include sounds from jazz, classical music, world music and even pop. An unusual musical mix that captivates the listener from the very first second.