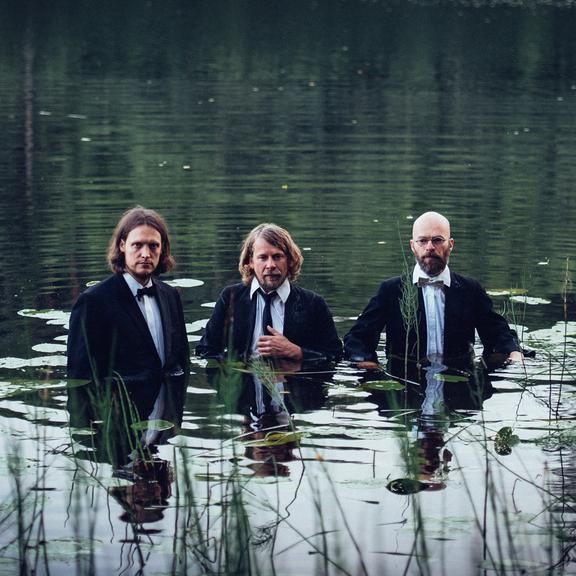 JOAKIM BERGHÄLL
Based in Helsinki, I am a composer/musician allergic to boundaries. My main instrument is the baritone saxophone, and I also play the tenor, alto and soprano saxophone, bass clarinet, flute, clarinet and a variety of band instruments. I began my musical studies with the cello at the age of three, and I lstill get to play it from time to time although I can't really consider myself a cello player. I'm also very occupied with percussion, since I keep working as a musician in the Theatre & Dance Academy of Helsinki, and since many bands seem not to need just a saxophone player but someone who can handle them shakers and such as well. (Some bands also seem to need the guitar, piano, background vocals or even bass!)

As a composer I've mainly written music for small jazz ensembles, but also for large orchestras. I do chamber music too, and it's something I eagerly study all the time, but my chamber music seems to end up being quite "rhythmic". All kinds of world music has always appealed to me, and the search goes on.

In September 2013 I finally managed to release my debut album (with ten pianists from the top of improvising Finland such as Iro Haarla, Kari Ikonen, Samuli Mikkonen, Aki Rissanen and Alexi Tuomarila). Now that's becoming an EIGHT-part series of records, looking to be completed by the end of 2020.

Besides composing, giggin' and playing to dance lessons I teach a little at the Sibelius Academy. I used to teach more, but at the moment playing seems to fill most the calendar. I've been lucky enough to tour in more than 20 countries so far, around Europe and in North America. There's a huge dilemma to be solved in this - my traveling is a burden for my family and mother nature as well, and yet at the same time it's the very thing I love the most. There's not much I can do to compensate for my frequent flying. I'm trying my best as a cycling & recycling vegetarian, but I know it's not nearly enough. A few years ago I tried to make a difference composing a piece written for string quartet & tenor saxophone titled "A Meal Beneath The Surface" - a statement in three movements on the subject of global warming. In the near future the piece is going to be converted to a quartet of contrabasses, with a baritone saxophone soloist.

This would be the spot to list all great teachers I've worked with and all the great musicians I've played with. I'll spare you with the list of "big names" but instead I'd like to say that playing with inspired musicians - not always necessarily the ones with the most chops or skill in the traditional sense of the word but the ones with true passion towards their thing - has in many cases been my most valuable teacher. It's good to keep your ears open when you sense someone's burning.

I greatly enjoy listening to good old records and checking out scores of music I appreciate, but it doesn't seem to satisfy my hunger to try finding my own voice inside some specific musical boundaries. I want to be influenced by a huge spectrum of musical traditions and I want to be able to melt all this information into something.. that is me. Someone once said that "tradition is not to preserve the ashes but to pass on the flame" and I strongly believe this is not where I want to go wrong.

2000-2019 have been busy years for Kalima, touring mostly in Europe but also in Africa, Asia and Americas. Kalima´s latest album “Flying like Eagles” with Knut Reiersrud on guitar, Jim Black on drums and Phil Donkin on bass was released in August 2019 and the record release concert was in the Philharmony of Berlin. Kalima´s Trio “Long Winding Road” with bass player Greg Cohen (Tom Waits, Ornette Coleman) and Max Andrzejewski was touring in 2016 with the “High Noon” album (ACT). The group Klima Kalima with Oliver Steidle and Oliver Potratz won ”Neuer Deutscher Jazzpreis” in 2008 and has released four albums. Kalima is also leading K-18, a Finnish group with quarter-tone accordion that won Jazz-Emma in Finland in 2013. With his solo program “Pentasonic” he plays guitar through electronics into 5 amps surrounding the audience. He is a member of the group “Kuu” with Christian Lillinger, Jelena Kuljic and Frank Möbus which claimed positive resonance with their second album “Lampedusa Lullaby”. He has a trio “Tenors of Kalma” with Jimi Tenor, Finnish underground pop star. Their first album “Electric Willow” was released in early 2015 and brought Kalima “Echo –Jazz” Prize nomination in 2016. Kalima is member of “A Novel of Anomaly”, group of Swiss virtuoso singer Andreas Schaerer. Kalima is a professor of jazz guitar at the university of Lucerne since 2017.

KARI IKONEN
The 2013 Yrjö Award recipient as the Finnish Jazz Musician of the Year, pianist, moogist and composer Kari Ikonen (b.1973) is currently active with his own trio and several other bands and projects like Orchestra Nazionale della Luna, Quartet Ajaton and Trio Toffa. He has worked with the likes of Louis Sclavis, Lee Konitz, Bob Moses, Ingrid Jensen, Magnus Broo, Vincent Courtois and Ron McClure. Kari has performed in South Korea, Japan, USA, Armenia, Turkey, Russia and 23 european countries. His playing and/or compositions have been recorded for more than 40 albums, 5 of these on his own name. His compositions have been honoured internationally, taking first prizes in the American “Julius Hemphill Composition Awards” and in the Italian “Scrivere in Jazz”. He also works as a part-time teacher at the jazz department of the Sibelius Academy.