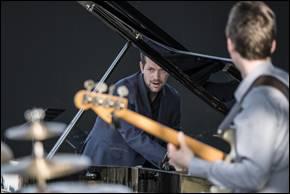 Austrian-born pianist, composer, and Steinway Artist Markus Gottschlich has been an active Jazz musician for nearly two decades. Like his own life story, Markus’ music reflects a unique blend of “old world" and “new world." In his captivating live performances, his lyricism and technique contribute to his highly-individual sound.
Markus’ debut solo album in 2008, "When the Day is Done", received tremendous critical acclaim. For his sophomore album, "Of Places Between", released in the summer of 2013, Markus teamed up with Grammy Award-winning musicians Federico Britos (Uruguay) and Jose Javier Freire (Puerto Rico). The global flavor with which his music is infused reveals an artistic journey that stretches far beyond his Austrian roots.
Born and raised in Vienna, Austria, Markus grew up in what was once Beethoven’s apartment. After receiving a classical piano education from an early age on, he started exploring Jazz and moved to the US where he attended Admiral Farragut Academy, Concordia College - NY, and graduated from Western Connecticut State University. Upon moving to Miami, Markus studied intensively with South Florida pianist Mike Gerber for several years.
Markus served as the Artistic Director of the Miami Beach Jazz Festival for three years and founded Jazz Academy Miami (JAM) before moving to New Mexico where he served as the Executive Director of the New Mexico Jazz Workshop. In late 2019 Markus was appointed as the Director of Music and Education at Jazz House Kids and the Montclair Jazz Festival.
He has been featured in DownBeat Magazine and is a sought-after juror for music competitions and showcase festivals like JazzAhead! in Germany. Released in 2020, the Egyptian blockbuster drama “Ras El Sana”, features Markus’ solo piano playing. Notable performances include: Jazz Festival Vienna, Jarasum International Jazz Festival, Saulkrasti Jazz Festival, American Airlines Arena, Olympia Theater, the Fillmore Theater, Rhythm Alley, among others.
He keeps a busy schedule performing and conducting clinics in the US, Europe and Asia while working on new compositions and commissioned works.