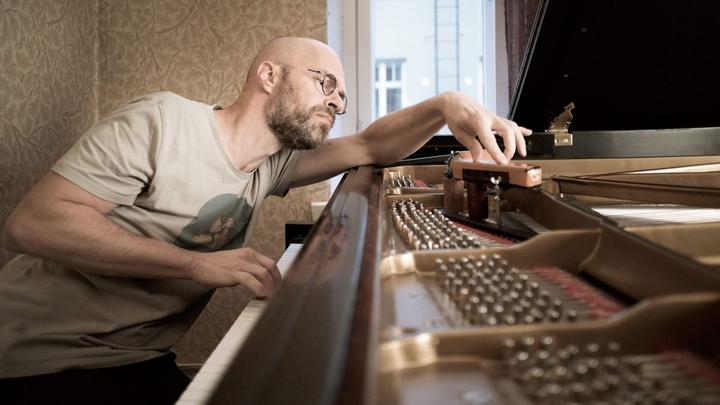 Twentieth century artists were often known to power their creative process with a jazz soundtrack—Jackson Pollack's frenzied brushstrokes supposedly sparked by bebop horn spurts—while further back loftily enlightened Romantic composers often hoped to distill the essence of other mediums in their work—perhaps most famously with Mussorgsky's Pictures at an Exhibition.

Jazz musicians taking sonic inspiration from the fruit of visual art may not be entirely uncommon, but for Kari Ikonen it's painterly methods, not products, which shape his Impressions, Improvisations and Compositions (Ozella Music, 2021). the title comes from the three categories into which Russian Modernist Wassily Kandinsky divided his work—definitions which apparently best befit the Finnish pianist's own approach to solo creation.

More often found fronting his excellent trio, it's too tempting to imagine any impressionistic, soul-searching, home-recorded improvisatory set dropped in early 2021 as the product of lockdown. In fact, Ikonen's album is a victim of the pandemic. Recorded in summer 2019 and originally slated for a spring 2020 release, Impressions, Improvisations and Compositions finally gets an international release on January 8, 2021—after already debuting to domestic five-star reviews from both the pre-eminent broadsheet Helsingin Sanomat and jazz portal Suomijazz.

National pride aside, there's plenty to distinguish Ikonen's first solo outing from the average pretty/cerebral, muscular/melodic keys workout. The thanks largely lie with the Maqiano, an apparently unique install-and-remove gadget devised to replicate the quarter-tones of Arabic and Turkish scales that have fascinated him for decades. Without exception, the album's most diverting moments are when Ikonen exploits his invention to explore the tonal possibilities of the Maqamat on a micro-tuned grand piano.

A majestic Middle Eastern melody parades proudly in unison over makeshift percussion in the frantic "Maqtu'ah on Maqam Rast," while the eye-blinking hypnotic opening "Imprologue" sears with a spontaneous spew of serialism, a flurry of granite quarter-tuned notes ordered with the randomness of rainfall. Most thrilling is the horror movie soundtrack of "Taqsim on Maqam Saba," a series of terrifying monochrome vamps which only lethargically shift tonal center after completely exhausting all options, having potentially tired the listener and player alike.

The stark Nordic stillness of "Blue" and "The Evergreen Earth" evoke the same Wind, Frost & Radiation (Ozella 2018) of Ikonen's excellent last trio release, but elsewhere the muse turns on the interior experience. The quasi-classical head itch of "Oppressive" and the fidgety rhythmic figure of "Rausch" gaze only inwards, tautly twitching for less than two anxious minutes apiece. Navigating these transitory mental moments might be the record's real reason for being—two further pieces don't break the 90-second mark and even the longest, most musical moments stubbornly refuse resolution. After scene-setting desert dances, the distinctly composed "Trace Oriental" is stolen away by a nefarious waltz that cues Ikonen's most painterly workouts, before suddenly collapsing with fatigue.

Yet to see these scattered pieces as any more than sketches would undermine the artist's own intent; the whole package feels fleeting, fragmentary, even unfinished, but crucially not half-baked—an arresting set of spontaneous vignettes littered with untranscribable, and likely unreplicable, twists, turns and techniques. (allaboutjazz.com)