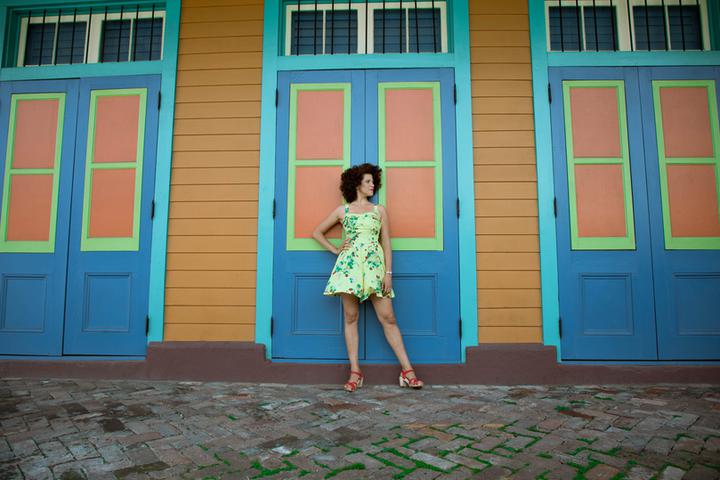 Improvisation is not just a technique for vocalist Cyrille Aimée. It’s a way of life, one that has not only allowed her to share her engaging voice and sparkling creativity with the world, but has led her on an unexpected journey.

By opening herself to the whim of the moment, Aimée has ventured from singing on street corners in Europe to dazzling audiences at some of the world’s most prestigious jazz festivals; from sneaking out to sing in gypsy encampments in her native France to acting on Broadway; from braving the notoriously tough audiences at New York’s Apollo Theatre to being hailed by The Wall Street Journal as "one of the most promising jazz singers of her generation" and called a “rising star in the galaxy of jazz singers” by the New York Times.

Earlier in 2018, Aimée ended a chapter in her remarkable journey with the release of Cyrille Aimée Live (June 22, 2018 on Mack Avenue Records). Receiving widespread critical acclaim from The New York Times and Wall Street Journal, this release served as the finale of her longstanding band while bidding a fond adieu to the material recorded and presented in the past 5 years in a live setting. Always looking for the next adventure, Aimée quickly shifted to her forthcoming 2019 release celebrating the legendary Broadway songwriter Stephen Sondheim.

“In my case,” Aimée told a rapt audience at her 2015 TEDx Talk, “it’s more of a human adventure than a musical vocation that made me want to devote my life to this practice.”

That adventure began in the small town of Samois-sur-Seine in France, where the young Cyrille Aimée (Sur-real M-A) was introduced to a wealth of diverse music by her French father and Dominican mother: everything from Michael Jackson to French chanson, Flamenco to country-western. She and her sister would dance around the living room, instilling a gleeful abandon and warm groove that still shine through her music to this day.

Aimée’s passion for music and inherent curiosity led her to a discovery that would change her life. As the site of the annual Django Reinhardt Festival, Samois played host to an annual gathering of gypsies, and their fireside sing-alongs would lure the precocious Cyrille out of her bedroom window after her parents had gone to sleep. Those experiences exposed Aimée not just to the joys of gypsy jazz, which would go on to be an important color in her rich palette of influences, but more importantly to the gypsies’ spontaneous, nomadic and music-filled way of life.

It was the idea and unlimited potential of improvisation that set Aimée on her course, and the desire to pursue that in-the-moment creation inevitably led her to jazz. She spent her teen years performing in the cafés and clubs of Paris, then attended the American School of Modern Music there. She garnered her first taste of fame – or, perhaps more accurately, notoriety – when she was selected as one of 16 semi-finalists for Star Academy, the French equivalent of American Idol. When she realized how restrictive the show’s contract would be, however, she opted to walk away, igniting a scandal in the French media.

Aimée escaped the spotlight but was soon drawn to the U.S., where she attended SUNY Purchase on scholarship – in large part due to its proximity to the jazz hub of Manhattan. She honed her skills through weekly gigs at a Soho restaurant and at Birdland Jazz Club; during that time she also became a regular at Smalls Jazz Club in Greenwich Village, where pianist/co-owner Spike Wilner and saxophonist Joel Frahm took her under their wings.
During her early years in NYC, Aimée returned to Europe regularly, organizing backpacking tours of the continent with a group of musician friends, performing at jazz festivals to pay their way. At the famed Montreux Jazz Festival in 2007, Aimée entered and won the vocal competition, recording her debut album with the prize money. It was the first of many such accolades to come, including winning the Sarah Vaughan International Jazz Vocal Competition and becoming a finalist in the Thelonious Monk Jazz Vocal Competition as well as the TV5MONDE series Talent Acoustic.

Released in 2008, Cyrille Aimée and the Surreal Band immediately spotlighted the singer’s winsome charm, supple voice and stylistic diversity, incorporating buoyant swing, French and Latin tinges, and graceful touches of folk and pop. In the ensuing years she would continue to hone and expand those influences, integrating elements of Brazilian music, gypsy jazz, and singer-songwriter traditions. A pair of duo albums with Brazilian guitarist Diego Figueiredo followed, along with live dates captured at Birdland and Smalls, the latter featuring trumpet great Roy Hargrove, and an ebullient date with the Chicago Jazz Orchestra.
In 2014 Aimée made her major label debut with the release of It’s A Good Day on Mack Avenue Records, which also marked the debut of an innovative new band that allowed her to explore the varied strands of her influences in a thrilling new way. Her quintet featured two remarkable guitarists: the contemporary jazz sound of French-Italian Michael Valeanu and the gypsy-flavored steel strings of Adrien Moignard. The same band returned for Aimée’s follow-up, 2016’s highly acclaimed Let’s Get Lost, providing a fruitful outlet for her wide-ranging talents as they toured the world over the last several years.

At the same time, no less an authority than Stephen Sondheim recognized that Aimée’s captivating gift for storytelling through song would translate to the theatrical stage. The musical theater icon hand-picking her to star alongside the legendary Bernadette Peters in an Encores Special Presentation tribute to Sondheim at New York’s City Center in November 2013, backed by Wynton Marsalis and the Jazz at Lincoln Center Orchestra. Hailed by the New York Daily News as “a revelation,” Aimée has since returned to that venue in another show and is studying the Meisner Technique, the acting method that has produced such stars as Diane Keaton, Tom Cruise and Robert Duvall.

She’s also taken to telling her own story to audiences and students alike, hoping to pass along the same fervor for living an improvisatory life that the gypsies awoke in her. Beside her TEDx talk, Aimée has twice been invited to address the Conference on World Affairs at the University of Colorado Boulder. She also teaches master classes for aspiring musicians, emphasizing an aware and spontaneous life – including a call to look up from smartphones and other addicting devices of modern existence - over technique and rote repetition.

For Aimée herself, the future holds the promise of many more surprises ahead – for her as well as her adoring fans. After more than a decade in New York City she’s embarked on a new chapter in New Orleans, perhaps the only other city in the U.S. whose mélange of influences and accents matches her own. She’s also focusing more intently than ever before on her own songwriting, taking her music in fresh new directions. As always for Cyrille Aimée, the only thing that’s certain is that she’ll find a creative spark and a new pathway from whatever happens next.