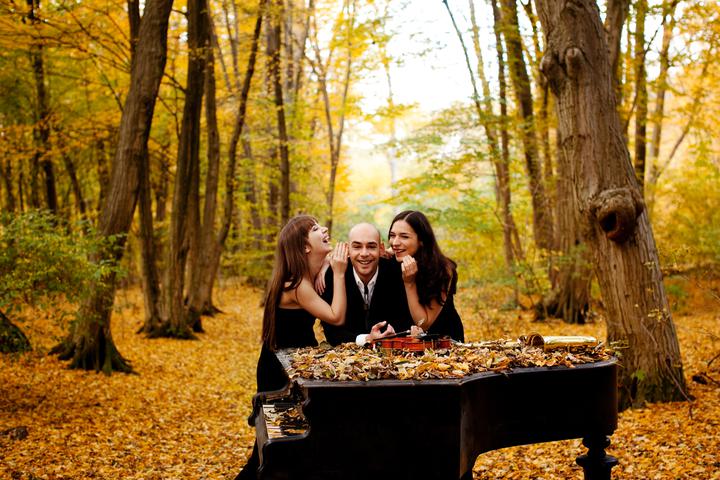 Trio Klavis
A quick glance at the lineup of Trio Klavis might lead to the conclusion that the sound of this ensemble is not necessarily related to classical music. Formed at the University of Music and Performing Arts Vienna, the three musicians Sabina Hasanova (piano), Jenny Lippl (violin) and Miha Ferk (saxophone) present themselves as an experimental friendly chamber music ensemble that follows its own musical path. The trio‘s outstanding renditions of well-known works from Viennese Classicism, Romanticism, Modernism and Dodecaphony experience a completely new interpretation, which breaks away from the ordinary and often nests in the realms of modernity. The repertoire of the ensemble is complemented by works composed specifically for this instrumentation, expanding and redefining the sound of classical chamber music in an unmistakable way

Trio Tribidabo
Listening to the tracks of this formation, one thing immediately stands out: genre boundaries or any other musical restrictions are completely nonexistent for the young Styrian trio Tribidabo. The guiding theme of the musicians Matthias Meister (saxophone, cajon), Bernd Kohlhofer (accordion) and Simon Reithofer (guitar) is simply the absolute musical freedom, which reveals itself in a tremendous stylistic variety. In Tribidabo‘s music, klezmer meets classical music, traditional Roma songs meet tango, the pulsating sound of the Balkans meets French waltzes, and, and, and. For this formation it seems as if there are no musical frontiers that cannot be overcome, no combination that is daring enough. The diversity in Tribidabo‘s compositions is wonderfully detached from any categorization and is unified in an incredibly lively and colorful whole.

Moritz Weiß Klezmer Trio
Presenting old traditional sounds in a new guise: Moritz Weiß (clarinet, bass clarinet, vocals) and his colleagues Niki Waltersdorfer (guitar, percussion, vocals) and Maximilian Kreuzer (double bass, vocals) present their own take on Klezmer music by developing it further and retelling it in a wonderful new musical language. Founded in 2015, this virtuosic trio bridges the gap between past and present and along the way incorporates many musical forms and styles from other epochs, while always giving a respectful nod to the Jewish music tradition. The sophisticated pieces of Moritz Weiß Klezmer Trio are loaded with energy and artfully multi-layered with elements from various other genres, such as jazz and classical music. The new formed soundscapes captivate the listener with soulful melodies, stimulate the imagination and open the doors to a whole new musical sphere.

Pneuma
In terms of contemporary music, Pneuma is an unusually cast ensemble that encompasses a vast musical range of styles far beyond the contemporary and that has chosen the sonic experiment as its guiding theme. Though dedicated to contemporary composed and improvised music as the ensemble Pneuma, the musicians Jakob Gnigler (saxophone), Robert Pockfuß (electric guitar), Christine Gnigler (recorder) and Bernhard Höchtel (piano) originally come from various musical backgrounds, such as baroque music, free jazz, noise and a cappella singing. Infusing all of these influences, the new works composed specifically for the ensemble lie somewhere between rhythmic acrobatics and meticulous sonic exploration, benevolent perfectionism and slightly provocative nonconformism.

At Pavillon
For sure, this combo definitely has a cool vibe going on. Their outfits are cool, their performance style is cool, but above all – and most importantly – their music is cool. The Viennese four-man band At Pavillon has succeeded where many other bands have failed. The four musicians have breathed new life into indie pop, a genre which has almost been played to death, and have given it a modern spin and made it interesting again. The charismatic head of the group Mataro Mwita (vocals, guitar) and his companions Bernhard Melchart (guitar), Tobias Kobl (bass) and Paul Majzadeh-Ameli (drums) focus on catchy melodies with high recognition value, varied and sophisticated songwriting and a perfect balance between danceability with hit potential and thoughtful depth. Definitely a big promise for the future.