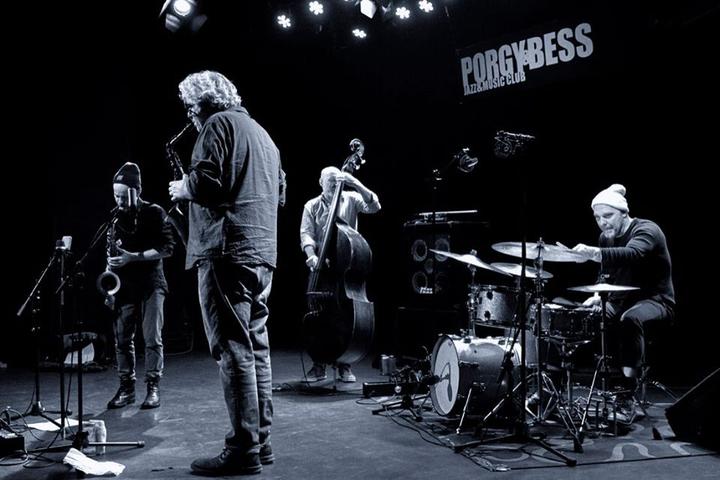 Korzo is a small Eastern European restaurant in South Slope Brooklyn. Until recently, its back room hosted one of the most exciting music series in New York. They presented the kind of program you could find only in NYC and, these days, you might find only in Brooklyn. When longtime collaborators Tim Berne and Chris Speed were planning a show at Korzo, they had a very short conversation about what kind of material to play. In “about five minutes” they had decided on the music of some of their idols and mentors: Ornette Coleman, Julius Hemphill, Dewey Redman and Charlie Haden. In even less time they had picked their rhythm section of Reid Anderson and Dave King.

In 1974 it was Julius Hemphill’s record “Dogon A.D.” that got Tim Berne started in music. This record hit Tim so hard when he heard it that he tracked Julius down in Brooklyn and asked him for lessons. This, mind you, was before Tim could play anything on the saxophone. Here’s Tim on Julius’s influence:

Tim Berne: “He’s my mentor. I didn’t play saxophone until I started with Julius. I was his first student, maybe even his only student ever. There wasn’t much happening for him; he was just kind of waiting. He was a legend in the Midwest but an outlier in New York. Julius gave me these tone exercises and composition lessons, even though I was at the ‘Mary-had-a-little-lamb’ stage of musical development. The confusion was inspiring, because you have to be self-motivated. The importance of sound was the thing he stressed the most. We would do three hours of long tones, then go get some food, and then come back and work on compositions. They weren’t typical one-hour lessons—they took all day. We became great friends. We even ended up living together briefly.”

Elan Mehler: “Could you even run major scales when you met him?”

The shows at Korzo, however impeccably curated, were not always well attended. But this one, boasting the progenitors of the Brooklyn scene (already christened as “Broken Shadows”) and compositions that will never stop being on the cutting edge, was packed. They had a couple of encore performances at Korzo, and then, riding the electricity generated there, they hit the road and toured the States and Europe. As I’m writing this, they are at the jazz mecca, playing a week at the Village Vanguard.

This isn’t the type of music that you can make with a typical “all-star” band. And this band, despite the acclaim of each of its members, is not a construction but something closer to a brotherhood. Not only have all four musicians known each other for decades, but they have established themselves at the foreground of creative music. And, of course, it’s this connection that drives the success of this band. These songs continue to inspire this level of connection, because it’s not just a way of playing music—it’s a way of hearing music. It’s why Tim spent hours playing long tones at Julius Hemphill’s apartment in the 70’s and it’s why, just down the street, 40 years later, they could set everyone sideways at Korzo. It’s about a devotion to listening and a collective responsibility to the sound. There’s something fundamental, universal and transcendent here, not so much created by Ornette, Dewey, Charlie and Julius as accessed by them. They found a door straight through the center of the music, and those that are really listening can walk through it.

Something that often gets lost about the music of Ornette, Julius, Charlie and Dewey is its collective nature. Despite, or perhaps because of, the towering genius of these composers, this is music that can’t be pinned to the page. It is born of ideas bouncing between musicians in deep connection with one another. Paradoxically, what makes this album successful as a tribute is also what makes this album completely unique. (Elan Mehler)