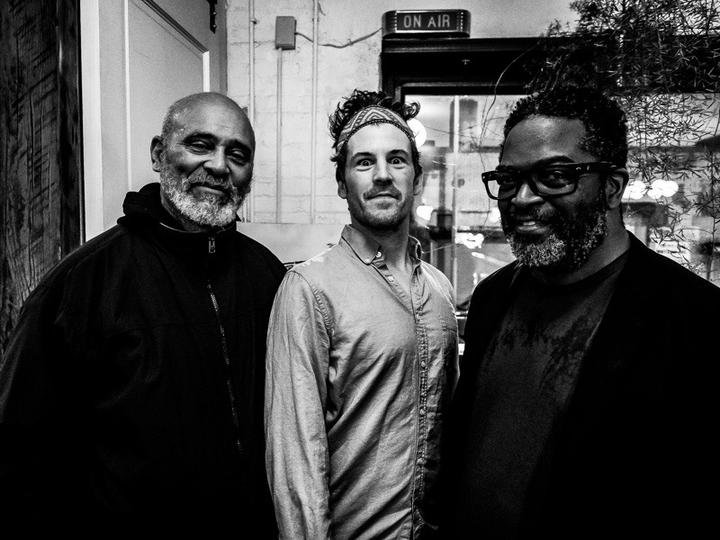 They will be presenting "The Swarm", their new and second recording for Astral Spirits, a fresh instalment by three of the freest creative minds around, this time including banjo in the mix, and with plenty of rhythmic combinations, ululating sounds and a vast musical visionary imaginary.

Brandon Seabrook is a guitarist, banjoist, and composer living in New York City where he has established himself as one of the most potent guitarists of his generation. His work focuses on the juxtaposition of hallucinatory soundscapes, jump cuts, angular composition, humor, and a massive dynamic range that can change in a nanosecond. He has released seven albums as a leader covering everything from pulverizing art-metal to chamber music, bridging the realms of extreme rock and the classical avant-garde. Rolling Stone Magazine noted, “The fiercely dexterous musician has launched a number of bands combining serious chops with manic intensity and a left- field compositional vision.” Seabrook honed his guitar skills at the New England Conservatory in Boston. He has since performed extensively in North and South America, Mexico and Europe, as a solo artist, bandleader, and collaborator. He has been called upon by Anthony Braxton, Nels Cline, Cécile McLorin Salvant, Ben Allison, Gerald Cleaver, So Percussion, Frank London, Bill Laswell, Ingrid Laubrock, and Joey Arias for his idiosyncratic physical performance style, hyperreal technique, and impeccable articulation. He has been profiled in the New York Times, The Wall Street Journal, Premier Guitar, Downbeat Magazine, Rolling Stone, NPR, The Chicago Reader, and The Wire. (Pressetext)

One of the wilder musical episodes this writer has heard in 2018 gets going a little more than three minutes into “Bovicidal,” the opening track on a new album by guitarist Brandon Seabrook’s eponymous trio. As double-bassist Henry Fraser sets up a steady pulse, the leader solos over top, moving from tight, twitchy, spasm-like phrases to sharp, stabbing chords, while cellist Daniel Levin adds his rough, sawing bow work. Like much of this record, aptly titled Convulsionaries, the passage sounds like some sort of rogue hybrid of chamber music and jazz, as though three virtuosos at an elite music school had secretly gathered in a practice room late at night to explore their most outré ideas.

Seabrook has a well-documented history of this sort of thing. During the past decade or so, the fiercely dextrous New York musician has launched a number of bands combining serious chops with manic intensity and a left-field compositional vision: the prog-punk power trio Seabrook Power Plant, in which the leader can often be heard shredding on banjo; pulverizing art-metal group Needle Driver; and the deeply peculiar Die Trommel Fatale, which suggests Mike Patton’s Fantômas band filtered through modernist classical and noise.

Convulsionaries stands apart from the aforementioned projects in one key way: There’s no drums. “Get the drums out, instantly everything’s better,” the guitarist joked recently on clarinetist Jeremiah Cymerman’s 5049 Podcast. If anything, the move makes Seabrook’s music sound all the weirder. Drums can have the effect of anchoring a group in a familiar genre, but on this record, the intensely thorny written passages and gritty improv tangles fly at the listener in disconcertingly stark fashion. The instrumentation also invites in the extensive use of negative space and sparse, low-volume playing, as heard on a track like “Vulgar Mortals.” (Another 2018 release, Stomiidae, also features Seabrook and Levin in a drummer-less trio context, this time improvising freely with saxophonist Chris Pitsiokos.) If you’ve never heard Seabrook’s music before, start with Convulsionaries for maximum disorientation. (HANK SHTEAMER, The Rolling Stone)