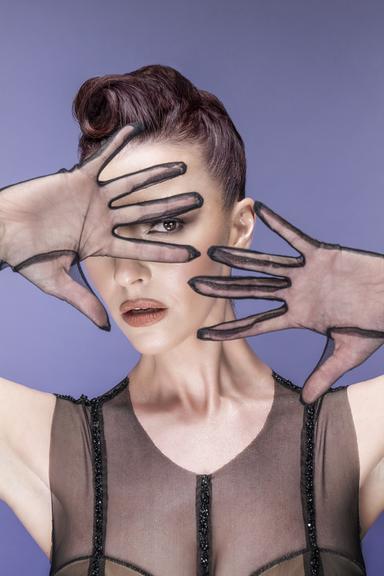 Chrystabell (her first name and full professional moniker) is a performing and recording artist , an actress who incorporates dynamic theatrical and multimedia elements into unforgettable performance experiences. By 18 she had become lead vocalist for the popular Austin, Texas- based continental swing act, 8 ½ Souvenirs. During a four year run with the band she was signed to RCA Victor, shared the stage with the likes of Willie Nelson and Brian Setzer, and toured America extensively. At age 21 she had a fateful meeting with legendary artist David Lynch, and the two began a lasting musical partnership. David Lynch wrote and produced Chrysta Bell’s 11-song debut, This Train, released in 2011. Evocative of Lynch’s film and television productions—as well as his own recent solo recording project, The Big Dream—the album’s dark and airy musical soundscapes conjure a dramatic atmosphere that allows Chrystabell’s breathy inflections and soulful melodies to take flight. The closing moments of his surreal epic Inland Empire featured the duo’s song “Polish Poem,” a classically Lynchian ballad. The pair recently released Somewhere in the Nowhere EP, the follow-up to her critically acclaimed debut album This Train. Written and produced by Lynch, "Somewhere in the Nowhere" combines heavily affected moody guitars and classic Lynchian retro-tinged production with sensual melodies. Of the chanteuse, David Lynch has said, “The first time I saw her perform, I thought she was like an alien. The most beautiful alien ever.” He adds that Chrysta Bell “is not only a killer performer, she also has a great intuitive ability to catch a mood and find a melody that’s really spectacular.” In addition to releasing "Somewhere in the Nowhere", Chrysta Bell will appear in the highly anticipated new “Twin Peaks” series on Showtime in 2017. She is also featured on the recent double LP Communion Records release of "The Music of David Lynch" with a song she wrote with Lynch, along with other artists like Duran Duran, Lykke Li, Karen O, Moby, The Flaming Lips and Angelo Badalamenti. This "legendary tribute concert"* which "has already attained near-mythical status"* was recorded live on April 15, 2015, at the historic Ace Theater in Downtown Los Angeles as a benefit for the David Lynch Foundation. Apart from her Lynch collaborations, Chrysta Bell just wrapped recording sessions in Bristol, UK, working on her sophomore album with Mercury Prize- winning producer John Parish, long time P.J. Harvey collaborator and producer. The new album includes guest contributors like Adrian Utley of Portishead, keyboardist Geoff Downes of bands Asia and Yes, and drone metal guitarist Stephen O’Malley of Sunn O))). As is increasingly popular these days with independent artists, Chrysta Bell is partnering with Pledgemusic, a crowd-funding site designed to help independent artists fund their musical endeavors.