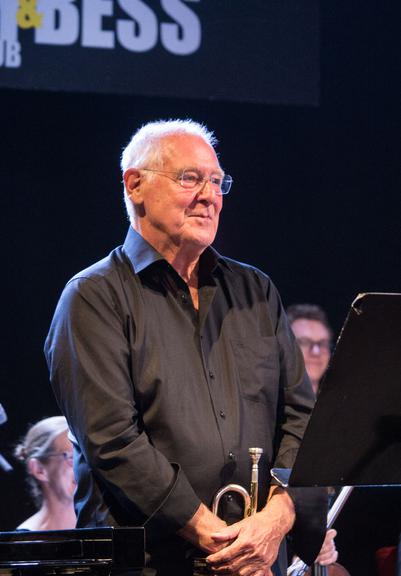 My last recording, entitled CODA, was based on the concept of very selectively updating different musics from various periods in my career, to be shaped into entirely new orchestral suites.

When asked during an interview if I had any plans for further updates or new compositions, I said, "Absolutely not. I have exploited my own universe as much as I feel is desirable or necessary. I think I've said what I have to say, which doesn't mean it shouldn't be said more often than in the past. There exists plenty of material that has been presented publicly only once. More performances would certainly be possible and interesting. Apart from the rare exception, my projects have always been initiated and carried through fruition by myself, but at this time I have neither the need nor the will to do it yet again."

Therefore, when bass clarinetist Gareth Davis contacted me last summer to ask if I were interested in writing some music for him, I could only answer, "No, thanks. I'm not sure that I could contribute anything at this point. I don't feel I can write any new music at the moment and I just don't want to keep repeating myself."

However, Gareth being somewhat insistent and presenting an idea of working with a vocal ensemble (plus brass and percussion as support) I was intrigued enough to consider it, particularly because I thought it could be a new challenge working with a vocal ensemble, something I had never done before. Since this then developed into concrete and enthusiastic offers of presenting such a project during the "Jazz Goes to Town Festival" at Hradec Králové in the Czech Republic, to be followed by a repeat performance at Porgy & Bess in Vienna, as well as possibly at other venues in the future, I began to seriously think about it.

A vocal ensemble obviously (at least in my thinking) required words. Being overwhelmed by the relentless assault of news of an atrocious war close by, I looked back to relevant texts I had used in the past, choosing appropriate segments -- abstract, in the case of the work of Samuel Beckett and Ernst Meister (previously used in my Many Have No Speech album), as well as of Giuseppe Ungaretti (from Cerco un Paese Innocente), and finally (not at all abstract, but very specifically related to the evils of war and the ever so sorry human condition in general), some of my own words from Comment C'est. Although not exactly "new" compositions, they will certainly be different than their original versions. (Michael Mantler)

Samuel Beckett (1906-1989), Irish, went to Paris in the late Twenties, where he began writing both prose and poetry. Until 1945 he wrote in English, but thereafter directly in French, consciously choosing the estrangement of the second, adopted language to "write without style."  His literary output consists of novels, poetry, and plays, including his seminal Waiting for Godot, a classic of the contemporary theater. He is considered one of the most important writers of the 20th century, with an influence on contemporary literature as powerful as that of Joyce, Proust, and Kafka. In 1969 he was awarded the Nobel Prize for Literature.

Ernst Meister (1911-1979), German, was recognized as one of Germany's greatest modern poets, in the line of Hölderlin, Trakl, and Celan, the latter of whom he discovered. He was awarded a number of literary awards, including the Petrarca-Preis, the Rilke-Preis, and from the German Academy for Languages and Literature, posthumously, the Büchner-Preis. Many of his poems, from his earliest publication in 1935 (Ausstellung) until his last and perhaps most achieved work (Wandloser Raum) in 1979, are meditations on death. He also published numerous other volumes of poetry and several radio plays.

Giuseppe Ungaretti (1888 -1970), the first and one of the most important and influential of modern Italian poets. He was born in Alexandria, Egypt. He studied at the Sorbonne, and while in Paris he became a close friend of Guillaume Apollinaire's. He published his first volume of poetry in 1916, a definitive break with the late 19th-century conventions of Italian poetry. After living in Italy for a number of years, he went to Brazil as a professor of Italian literature at the University of Sao Paulo. On his return he taught at the University of Rome. His work deals with the large themes of human existence: loneliness, love, loss, nature. But above all, his work is a long record of confrontation with death. T.S.Eliot ranked Ungaretti as "one of the few authentic poets" of the century. He was nominated for the Nobel Prize for Literature in 1969.