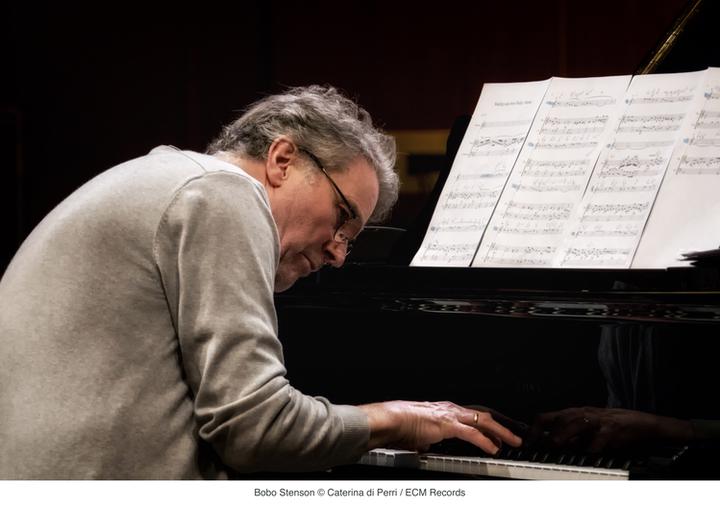 “A strong case can be made that Bobo Stenson is the greatest living jazz pianist born outside the United States. He is a poet of the first order. Stenson’s spontaneous melodic and harmonic discoveries, his trajectories and distant departures, arrive at a breakthrough to lyricism that, once found, sounds like it has always been there.”
– Thomas Conrad, Jazz Times

Bobo Stenson’s trio takes a stand against indecision on this decisively beautiful new album. Characteristic elements including Stenson’s lyrical touch, Jormin’s folk-flavoured arco bass and Jon Fält’s flickering, textural drumming are all well-displayed on Contra la indecisión, the trio’s first new recording in six years. As ever, the group draws upon a wide range of source materials. A yearning title song by Cuban singer-songwriter Silvio Rodríguez, Bartók’s adaptation of a Slovak folk song, a piece from Mompou’s Cançons I Danses collection, and Erik Satie’s Elégie all fit into the programme, alongside original compositions and group improvising. So strong is the group’s character and the musical identity of each of its members that the assimilation of this material always seems organic and logical. As Ben Ratliff wrote in the New York Times, “In Stenson’s records you don’t hear strategies or contentions, but a natural working flow.”

With Stenson, the respectful transformation of the source material is the essential thing. Unlike colleague Anders Jormin, who has five new pieces here, he’s not an especially prolific composer – although his rare tunes, like “Alice” here are worth waiting for – but he brings his own sensibilities to everything played. “We pick things from different areas,” Stenson once explained to All About Jazz. “It doesn’t matter so much where it comes from. For us, it’s more about what we do with it. You try to be true to the original, and you try to take it a little further. ”

Pieces this time around have come from various contexts. “The Bartók piece was one we’d played together with a choir a few years ago,“ says Bobo. “The Satie I’ve known for a long time and always liked. Anders brought in the Rodríguez tune. His pieces seem to work well for us. [The Stenson Trio’s 2007 recording Cantando also opened with a Rodríguez composition] ‘Cancion contra la indecisíon’ is an older Rodríguez song, from the ’70s. And then the Mompou: I’d played some Mompou together with [English saxophonist] Martin Speake a few years ago, also music from the Cançons I Danses, but not this particular piece. When we play the Mompou tune with the trio in concert we often use it as an intro to ‘Don’s Kora Song’ [a Don Cherry composition heard on Cantando]. And then Anders, of course, is always writing and writing music. He brings his tunes to us and we see which ones will work for the trio. What else? The ‘Kalimba Impressions’ is an improvised piece. Jon Fält had two kalimbas with him of different sizes, keys, tonalities. We set up a sort of melody and based the piece around that…”

In 2007 the drum chair was taken by a player then little known outside the Swedish free scene, Jon Fält. “We’d been playing with Paul Motian, but Paul had decided he wasn’t going to leave New York anymore, which was difficult for a working band. And Jon Fält I’d known since he was a teenager … I saw him again at the Fasching Club in Stockholm where they had some special event, some celebration. I was supposed to play in duo with the bassist Christian Spering, but I asked Jon to join us for a few pieces. It was such fun that I called Anders afterwards and said ‘I think we have the new drummer for the trio.’” A decade and three albums later, it’s difficult to imagine another player fitting this group so well. Fält’s playful, lightning-quick responses, challenging and detailing the musical action, are fully integrated into the trio’s musical concept and character.