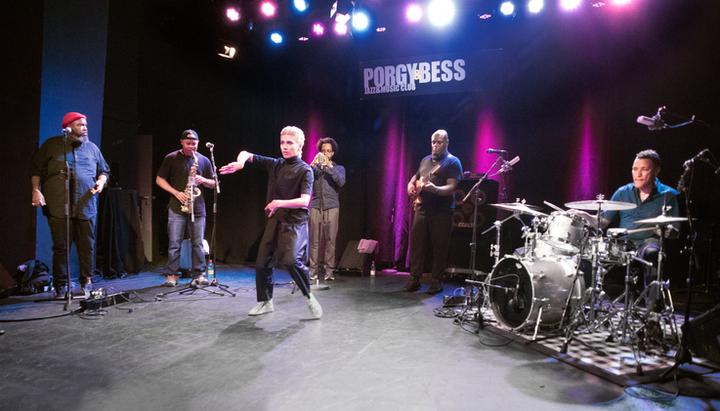 With his normative M-Base project/collective, Steve Coleman has been significantly pushing jazz since the 1990s, countering neoconservatism with unbending street cred. Coleman has constantly related his neo-bop, which is freely wandering in modal realms, to African-American music of the time, decidedly advanced pop-musical currents such as hip-hop and rap, and explicitly revealed their jazz roots. Most compellingly with his band Five Elements. Their initially fat, lush band sound Coleman has clearly slimmed down over the years. The foundations now form a harmony-instrument-free quartet augmented by a spoken word artist/rapper. Called Kokay, he describes himself and his skill as a wordsmith. "Wordsmith" that is - what an original finding. As such, he has forged a very special form of expression in a mishmash of free-style rap, scatting, soul-voice and recitation. Not that his contributions, as conventionally conceived in rap, acted as a frontman with instrumental backup. The word-powerful is equal voice in Coleman's sophisticated model. That model in which improvisational freedom and form consciousness are in balance. Regarding the latter, with a very strong weighting of the melodic, and even more clearly, the rhythmic component. A polyrhythmic/tonal madhouse as a result, "elementarized" by the excellent band, culminating in irresistible, kinetic energy. The intensity of the M-Base idea, which does not describe a style, aims at a constant growth through creativity. Intended for music as for being human, as Steve Coleman proclaims. Listening to this growth touched heart and soul. Coleman and his environment are yesterday as today a decisive factor concerning the anchoring of the African lineage in jazz. Black Music forces. (Hannes Schweiger)