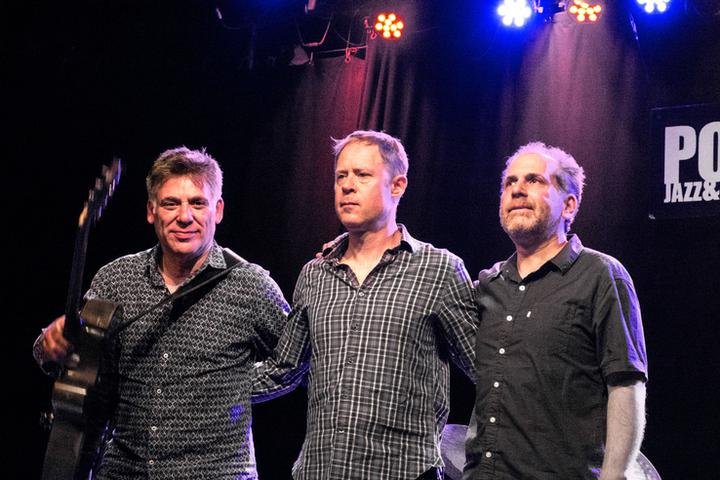 Since 1991 Hammond organist Larry Goldings, guitarist Peter Bernstein, and drummer Bill Stewart have constituted what Jazzstation calls an “…unusual camaraderie of world-class players… Three of the world's best players in the current jazz scene...” take to the musical playground to perform eight diverse, close-knit pieces that are a joy for the senses.
Labeled “the best organ trio of the last decade” by the New York Times, these three possess a special place within the rich history of organ trios; with their adventurous eclecticism, they progress beyond the bop-influenced soul jazz of the likes of Jimmy Smith, Brother Jack McDuff and Shirley Scott and into their own singular musical realm. Larry Goldings has collaborated with the “who’s who” of soul, pop and jazz, from Maceo Parker, Tracy Chapman, and James Taylor to Jim Hall, Herbie Hancock, John Scofield, and Charlie Haden, and is in demand as a composer for film and TV. Peter Bernstein has been called “the most universally respected and admired jazz guitarist of his generation”, and his work with such greats as Sonny Rollins, Jim Hall, Joshua Redman, and Brad Mehldau backs up the claim. Known for his melodicism and polyrhythmic complexity, Bill Stewart has played with Joe Lovano, Dave Holland, and, like Goldings, Maceo Parker, and has had a long-time collaboration with John Scofield. All three are recognized composers.
Toy Tunes marks the trio’s twelfth album since their first release in 1991. It’s their second recording with PIROUET. The press greeted their first PIROUET CD, 2014’s Ramshackle Serenade, with “It doesn’t get much better than this” (allaboutjazz), and “Another memorable outing from one of current jazz's finest small groups” (Jazztimes). Goldings states that, “Our approach has never been dictated by the "organ trio" format but rather by our individual personalities, our broad range of musical interests, our desire to be highly interactive, and to grow together as musicians.”
Goldings’ relaxed, lyrical Fagen was named for Steely Dan’s Donald Fagen, whose records “introduced me to a whole new world of harmony and song structure”. Larry comments that Stewart’s Don't Ever Call Me Again “possesses Bill's unmistakable combination of craftiness and wit.” The piece sports a funky fusion feel, and the three keep the communication going as they converse with Stewart’s talkative drums. Bernstein wrote the dreamy Lullaby For B for his oldest son. Goldings says it “unravels like a novella, and, due to its rich harmonies and unexpected structure, is a joy to play.” The standard I'm In The Mood For Love is a variation on the arrangement Goldings wrote almost 25 years ago for the great Jim Hall. “The three of us knew and loved Jim, and he inevitably pops into our consciousness when we play this.” Goldings calls Carla Bley’s And Now the Queen “a gem of a composition. I still can't fathom how she can say so much in four bars. Carla's pieces invite the interpreter to dive right in and explore. She gave us her own handwritten chart from which to work!” As for Toy Tune, Goldings says that improvising on Wayne Shorter’s pieces “is akin to playing with a Rubik's Cube.” The trio takes a slightly more relaxed stance than Shorter’s original version, playing delightful games over the changes, with Stewart wailing over the fading riff at the end. Bernstein’s Calm is a beautiful mood piece with a serene church-like quality, and with Maybe, Goldings recounts that, “When I was in elementary school my mom took me on a train from Boston to New York to see my first Broadway musical, Annie. Charles Strouse wrote the music, and his song Maybe has always stuck with me. With its timeless melody and shifting key centers, it seemed like a natural fit for us to interpret.” Depth, lyricism, complexity – it’s all here, as three of the strongest musical personalities of their generation, join hands to play music that is pure joy.