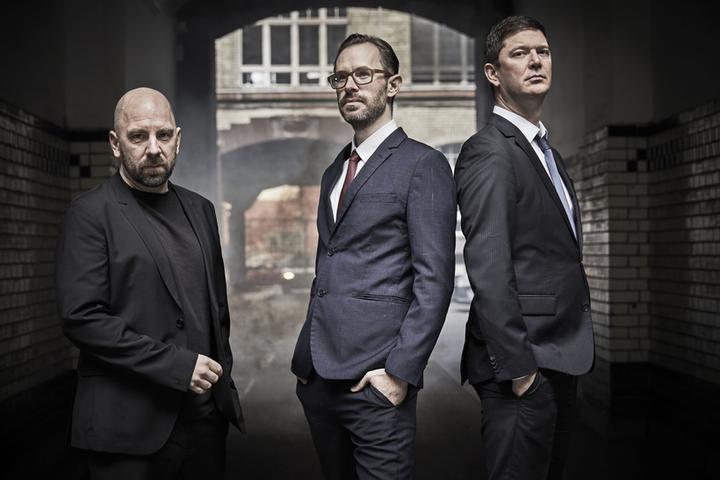 It would be wrong, however, to see the elegaic feel of much of this album as a response to the pandemic. Helbock and producer Siggi Loch were having “a productive and fruitful discussion” about these ideas a full year before the recording sessions took place at the Emil Berliner studios in August 2020. Loch has a fascination for the way cool jazz “turned the wheel around” to connect with a wide audience, and references and connections with the cool jazz movement are scattered throughout this album. It is also the very first time that Helbock has included a tune by his teacher for over a decade, American pianist Peter Madsen, who toured extensively with Stan Getz and also taught Maria Schneider.

While the overall mood and vibe of “The New Cool” tends towards the lyrical and the spacious, the range of expression is remarkably wide. The fine filigree piano opening of “I Feel Free” is in complete contrast to the anthemic grandeur which the trio reaches at the peak of “Angel Eyes”. Helbock also has a remarkable way of setting the tone of piece from the very first utterance: “Hymn for Sophie Scholl” is softly elegaic, whereas the forward momentum of “Truth” sounds like it could easily do duty as a film or TV theme.

Helbock has been inspired by the innovations and concepts of Lennie Tristano, and his sense of affinity with the Chicago-born genius runs deep. Tristano once decreed that "the jazz musician's function is to feel.” Helbock Jansen and Studnitzky have taken that maxim to their hearts. In “The New Cool” it becomes a totally convincing and natural way to make music; and to be.

David Helbock’s fine musicianship goes hand in hand with a remarkable ability to communicate on several levels. As British writer Peter Bacon has written, there is “much to intrigue the mind, much to warm the heart and much to tickle the funny bone.” German critic Roland Spiegel has elegantly described his music as “never cerebral, but captivating both the head and the body....” For his new album the Austrian-born pianist brings those strengths and that ability to engage and appeal to audiences into a new and different venture.

“It was my wish to cool things down a bit,” he ex-plains. He has formed a new trio with guitarist Arne Jansen and trumpeter Sebastian Studnitzky, and it is clear when he talks about it how far he has already moved on since his previous group: “In the Random Control Trio we had a lot of instruments on the stage, there was a lot of changing from one instrument to another… and a lot of notes.” And the new group? “It is more about emotions. And emotions are the most important thing in music.”
This trio has are other differences from his previous groups: in the past, his bands have been made up of musicians from his native Austria. But he has now been living in Berlin for five years, and “The New Cool” presents his first group formed with players who have also adopted Berlin as their home city. With Arne Jansen, originally from Kiel, what appeals to Helbock is that “he is such an unselfish player, very centred and very calm – and subtle too. With him it’s all about the music.” Studnitzky is originally from the Black Forest, and Helbock likes “his style of playing with that very airy sound” and the fact the range of timbres and moods he creates with just one effects device. And how does it work in the trio? “All three of us are melody players, but we are all capable of holding back and giving space to the others.” (David Helbock)