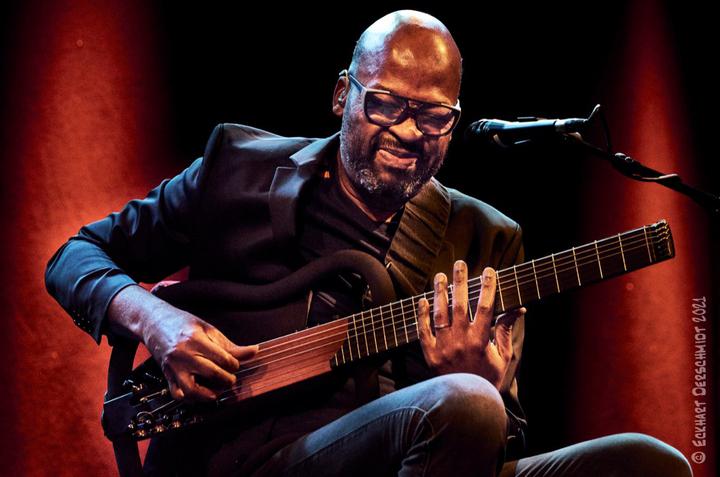 If you’re going to make a tribute album that’s more meaningful than just reminding the listener to go play the original, it helps to highlight an underrated aspect of the honoree. Herbie Hancock is renowned as a postbop keystone, a pioneering fusion-funkateer, and a polymath sophisticate. HH effectively makes the case for Herbie Hancock the songwriter (more so than composer): his knack for sturdy melodies and catchy rhythms that hold up regardless of texture, timbre, or pacing.

The other notable aspect of this solo recording is Lionel Loueke’s warmth and restraint. The Beninese guitarist can be an effortless virtuoso, whose affinity for deft fingerpicking and cooed vocalese can occasionally make his music feel too pat and ornamental. On HH he goes out of his way to avoid that dynamic. “Cantaloupe Island” is one of only two songs where he plays electric, and one of the few where he doesn’t vocalize, while slowing the pace enough to tweak the toe-tapping soul groove into more of a swampy country blues. When he inevitably does let the fingers fly, his quicksilver pluck gives the electric keys and torrid drumming on the original “Actual Proof” a miniaturized run for their money, and the nimble fretwork on “Rockit” stands in stark contrast to the splashy effects and turntable scratch of Hancock’s version without losing its melodic jewels.

Not surprisingly, Loueke’s curation of the Hancock catalog is mostly spot-on. Covering songs from 1962 to 1983, he freshens the anachronistic fusion glide of “Come Running” with some gentler Brazilian strokes, and faithfully renders already gorgeous groovers like “Driftin’” and “Dolphin Dance” with acoustic intimacy and a dollop of love. It’s not perfect: “Butterfly” doesn’t feel sufficient without Bennie Maupin’s horn; a closing take on “One Finger Snap” is floridly “funky” and out of step with the rest of the disc; and two quiet Loueke originals are frankly less interesting than Hancock’s. But in paying homage to a titanic figure with whom he has played on three albums and dozens of gigs, Loueke respected the process, and the artist, enough to examine his own habits and personally grow from the experience.