Manfred Paul Weinberger Nonet 'In Presence of Kenny Wheeler' (A) 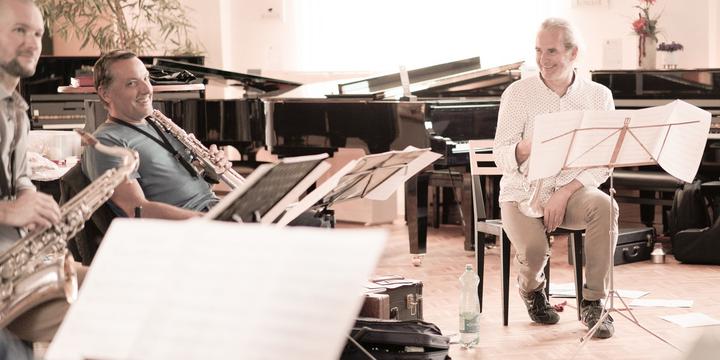 My first experience of hearing the music of Kenny Wheeler was the CD "Flutter By, Butterfly" from 1988. His work opened up a sound aesthetic of contemporary music that has been a part of me to this day. Wheeler's unique way of playing, including his phrasing, his shaping of the melody, the colouring of his tone and his interaction with the musical flow, reveal an artistic depth that strongly appeals to me. His improvised playing is characterized by allowing everything to develop from the interplay, waiting for opportunities and thus also taking risks.

Kenny Wheeler draws on a wealth of experience that is difficult to define, stylistically. After studying the cornet and classical composition, the young Canadian worked in a wide variety of fields in London from the age of 22. He worked in swing dance bands, free jazz and jazz-rock groups, in studios and as a sideman, he performed on advertising jingles and was involved in intercultural projects between chamber music formations and large orchestras. 30 CD productions have been released in his name in a wide variety of formations. Dave Holland, Joni Mitchell, Philly Joe Jones, Bill Frisell, Michael Gibbs, Steve Coleman, Anthony Braxton, Rabih Abou-Kalil and Norma Winston, to name but a few, all brought Kenny Wheeler on board as a soloist. In this context, his specific tonal language matured. Today it is perceived as being in a category of its own that goes beyond established concepts of aesthetics or stylistics – both in his roles as a composer and soloist.

I first met Kenny Wheeler in person in 1997 at the “Banff Centre For The Arts”. He was part of the faculty for the '97 summer workshop in the Canadian Rocky Mountains, which I attended on a scholarship. His opening statement was short but characteristic of his modesty and tongue-in-cheek self-irony: "Usually I don't say so much, but if I do, I don't say so much". And indeed, he was not a man of many words but rather a charismatic aesthete of his own sound world. The titles of some of his compositions, however, reveal his pronounced pleasure in wordplay, such as "The Widow in the Window", "Double, Double You" or the aforementioned "Flutter By, Butterfly". As a trumpet performer in the “Upper Austrian Jazz Orchestra”, I had the privilege of playing several concerts with him in Europe from 1998 to 2006. The times spent before and after concerts, and during rehearsals, long bus journeys and shared meals brought us musicians closer to his fascinating and unforgettable personality. These times gave me some very precious moments and insights into the sound world of this great artist of contemporary music with his unmistakable characteristics. Kenny Wheeler passed away in London on 18 September 2014. His life's work as a composer, bandleader, soloist and sideman provided a rich source of inspiration for artists of subsequent generations. When you feel a closeness to the works of specific artistic personalities, they themselves become important companions in one's own development. Therefore, it seems important to me to develop an awareness of the principles that can be traced from the music of fascinating idols into my individual work in order to remain true to myself in all my personal artistic pursuits.

The lessons learnt from Kenny Wheeler's work for me mean, among other things, being open to new concepts, allowing space for an ambience, pausing and waiting for meaningful moments, tracing outside influences with interest and, last but not least, being prepared to fail with an idea. Seen in this light, the compositions in this production are an exciting venture, undertaken with relish. This nonet creates soundscapes in a wide range of forms, from refined chamber music dialogues to energetic orchestral sounds. I am particularly pleased to be able to bring together esteemed colleagues from the Upper Austrian Jazz Orchestra in this project, with whom I share common experiences and the trust gained throughout the process. The Upper Austrian Jazz Orchestra experienced an intensive artistic collaboration with Kenny Wheeler, which has resulted in a very special bond with him.