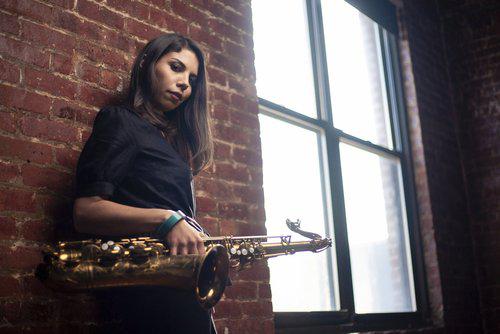 Drawn from a 2018 Jazz Gallery commission inspired by the life of artist Frida Kahlo, saxophonist and bandleader Melissa Aldana is set to release Visions on May 24 through the Motéma label.

Aldana, winner of the 2013 Thelonious Monk Institute of Jazz International Saxophone Competition, recorded the album with an ensemble that includes vibraphonist Joel Ross. And it’s the connection Aldana and Ross forge on the title track, premiering below, that helps make the recording such a monumental statement. While encouraging her bandmates to take advantage of each composition’s space for improvisation, it’s Aldana and Ross’ ferocious exploration of the song’s theme that displays the deft musicality Visions showcases over 12 cuts.

“This movement is the musical representation of my own explorations of self-identity that every woman and every artist faces, and includes feelings of pain, mistrust, exhilaration and relief,” the bandleader said about the opening portion of the album, which includes that initial 2018 commission. “Experimenting both harmonically and rhythmically with moments of frantic movement interspersed with order and structure is one of the ways I conjure the messiness, struggles and heartbreaking contradictions present in these visions of identity and self-worth.” (Downbeat)