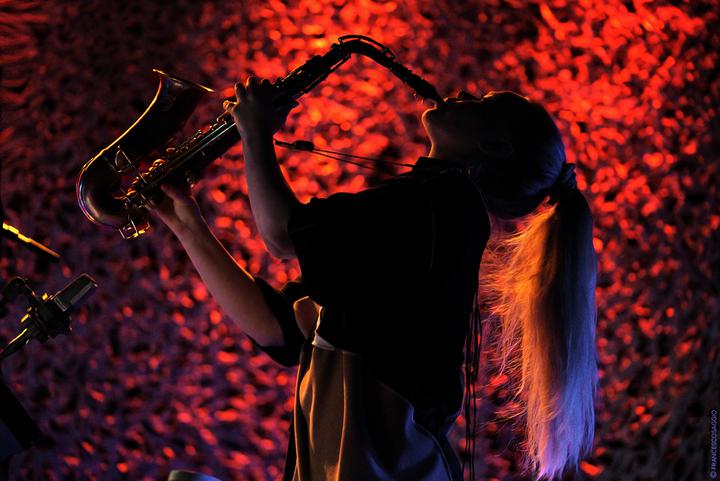 A fantastic improvisor has challenged herself to compose, and in her new exciting trio the sparks fly!

The energetic saxophone player Mette Rasmussen is best known for strong improvised concerts, mainly solo, but also in smaller groups. She was also the warm-up act to, and later part of, the band Godspeed You! Black Emperor.

Now she has to a greater extent prepared and worked through her ideas in advance, utilizing her unique voice and sound as an electrifying toolbox. Together with the brilliant musicians who form the trio, we can promise you a very special concert. With only a light sprinkling of electronic effects, Rasmussen is at her most capturing in this setting, doing brilliant work on top of Håker Flaten’s groovy bass lines and Corsano’s mesmerising beats.

The concert is commissioned and supported by Nasjonal jazzscene, Norway

Mette Rasmussen is a Danish saxophonist now based in Trondheim, Norway. She is known for her mind bending explorations in jazz and free improvisations. She has recorded and performed with Alan Silva, Fire! Orchestra, MoE, Kristoffer Lo & Trondheim Jazz Orchestra and many others, as well as with her own bands Trio Riot and Mette Rasmussen Quintet.

Ingebrigt Håker Flaten is an active bass player in the jazz and free jazz genres. He has been involved in many seminal Norwegian bands since the 1990's: The Source, New Conception of Jazz, The Thing and Atomic are just some of them. For many years he lived in Texas with the band The Young Mothers as his main output, but he has also released several albums under his own name.

Chris Corsano is a NY-based drummer who has been active at the intersections of collective improvisation, free jazz, avant-rock, and noise music since the late 1990's. In addition to solo music, he has also played and collaborated with Björk, Evan Parker, Joe McPhee, Merzbow, Nels Cline and many more.