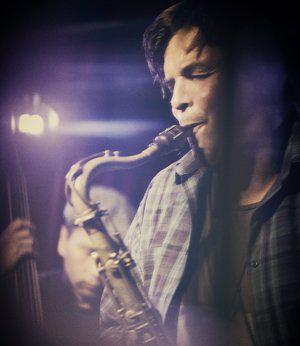 Igor Lumpert What makes Igor’s music and playing so unique is its complexity. There is a quality to his playing and compositions that has absorbed the rich traditions of jazz music in this country but has also added something new and unidentifiable. His compositions flow with ease and vitality off odd time signatures. There is also darkness and a mystery to his sound that is all his own. No one else sounds like that—and that’s one of the highest compliments you can give to a jazz musician. The complex emotions that feed the sounds of great artists in the jazz tradition have to do with the experience of enormous conflicts. You can’t fake that quality, and Igor has it. Jane Ira Bloom, Saxophonist/composer/Grammy winner A progressive tenor/soprano saxophonist and composer, Igor’s music represents a unique fusion of jazz, funk, Eastern European rhythms, and modern neo-bop sketches. He has performed with jazz legends including Reggie Workman, John Abercrombie, Chico Hamilton, Nasheet Waits, Doug Hammond, Ben Monder, Robert Glasper, Jonathan Blake, Damion Reid, Chris Tordini, Tommy Crane, Matt Brewer, Jamire Williams, Sam Barsh, Joe Sanders, Liberty Ellman, Tyshawn Sorey, Rodney Green, Sonny Simmons, Boris Kozlov, Andy McKee and many others. Born October 27, 1975, in Novo Mesto, Slovenia, Igor began his professional training at age 19 at the Bruckner Conservatory in Linz, Austria, where he studied with Doug Hammond. During this period, he was a member of Munich-based band Sidewinders, winner of the“Best Jazz Group of Germany” award. After completing his studies with honors, Igor was invited by one of the world’s finest bassists, Reggie Workman, to study at the New School University in New York City. He received a scholarship and moved to New York in fall 2000. In New York Igor trained with some of the world’s finest musicians—George Garzone, Reggie Workman, Buster Williams, Chico Hamilton, Billy Harper, and many others. In April 2002, Igor was selected for the New School All-Star Wayne Shorter Ensemble, which performed at the “Beacons In Jazz” award ceremony at the Supper club, where Mr. Shorter was honored. Igor has performed at jazz festivals in Belgrade, Ljubljana, Novi Sad, Cankarjev, Ljubljana, Cfero at major jazz clubs in New York including the Jazz Standard, Birdland, Cornelia Street Cafe, Supper Club, and Birdland; and venues in Vienna, Berlin, Budapest, Munich, Linz, Graz Zagreb, Beograd, Sarajevo, Novi Sad, Athens, Kreta,Venice Igor’s band Innertextures represents Igor's passion for the music to journey to new and daring places. He is supported in this effort by bassist Christopher Tordini and drummer Nasheet Waits. Innertextures—(shapes of our original self/being)—committing yourself to an act of effort and responsibility, to thank the Creator for his gifts and love by creating something unique and beautiful. In 2011 Igor was commisioned to create a piece for a closure of European Capital of Culture. With multimedia artist Zeljka Blaksic he created “Resistance of the Earth”, which is a multimedia project that combines several artistic genres; from video, performance, 16 mm film to live music. The theme of the project covers the world of natural disasters like earthquakes, volcanoes, hurricanes and tornados. Igor has released three CDs as a leader:”Innertextures live”(2012) for Portugeese Cleen Feed records, “Mineral Mind” (2010) and“Innertextures” (2004). In addition to his work as a performer, he has an active career as an educator, having taught master classes and improvisation lessons throughout Europe and the United States.