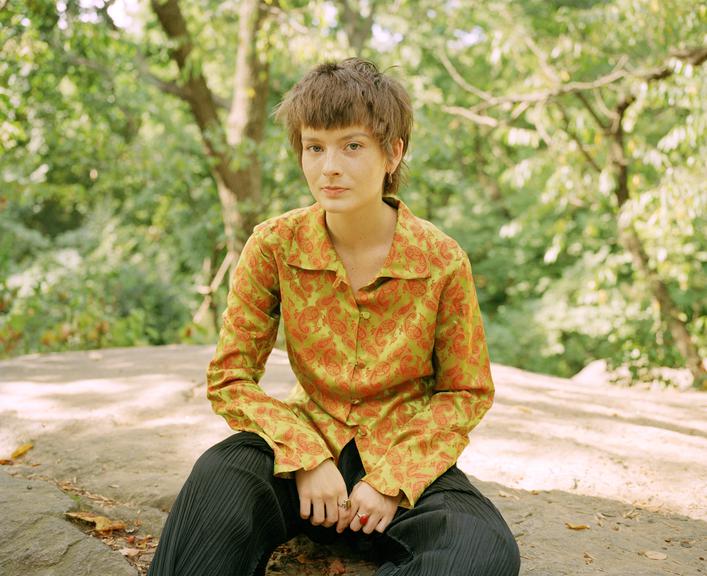 Zoh Amba O’ Sun is a quartet of deep sound painters soaring in tender devotional hymns and folk-like melodies.  Hymns that push and tear into the deepest place in the heart of avant-garde improvisation.  An uncompromising group traveling together in sound to reach the highest in spirit. (Pressetext)

Zoh Amba is a New York Based Saxophonist, flutist, and composer. Amba practiced saxophone to the forest that surrounded her home before she later traveled to study with David Murray in New York, and also at the San Francisco Conservatory Of Music & New England Conservatory in Boston. Today, her music is full of folk melodies, mesmerizing refrains, repeated incantations and powerfully executed Avant-Garde.  Amba has had two records released this year. Her debut record O, Sun was produced by John Zorn and released on the prestigious label Tzadik. She will have her third record entitled Bhakti featuring Micah Thomas, Tyshawn Sorey, and Matt Hollenburg released in August 2022.

Micah Thomas was born in 1997 in Columbus, Ohio. He started playing songs on the piano by ear at the age of 2, and shortly afterwards he started private piano training. From his sophomore year of high school onwards, Micah began gigging regularly with violinist Christian Howes, and was a regular faculty member at his annual Creative Strings Workshop from 2015-2018. He also has appeared several times with Byron Stripling and the Columbus Jazz Orchestra as a guest artist, performing with John Clayton and Joshua Redman for their 45th anniversary concert series in 2017. He has also performed throughout Ohio with other musicians including JD Allen, Billy Contreras, Eddie Bayard, George Delancey, Cedric Easton, and Bobby Floyd.
In 2015, Micah Thomas received the Jerome L. Greene Fellowship from the Juilliard School, and received his Master of Music (M.M.) degree in 2020. He is now touring and performing locally and internationally, both as a leader of his own trio, a steady member of the Immanuel Wilkins Quartet and the Giveton Gelin Quintet, and as a sideman for Ambrose Akinmusire, Lage Lund, Billy Drummond, Zoh Amba, Stacy Dillard, Joel Ross, Nicole Glover, Joshua Redman, Melissa Aldana, Etienne Charles, Harish Raghavan, Gabe Schnider and others.
In June 2020, Micah Thomas released his first album, “Tide”, which received positive reviews from the New York Journal, The New York Times, JazzTimes, and Financial Times, among others. He also has appeared on several albums as a sideman for Immanuel Wilkins, Billy Drummond, Zoh Amba, Giveton Gelin, and Walter Smith III.

Thomas Morgan began playing the cello at 7, eventually switching to upright-bass at 14. In 2003 he received his bachelor's degree in Music from the Manhattan School of Music, where he studied with Harvie Swartz and Garry Diall. He has also studied briefly with Ray Brown and Peter Herbert. Morgan has worked with David Binney, Joey Baron, Josh Roseman, Brad Shepik, Steve Cardenas, Timuçin Şahin, Kenny Wollesen, Gerald Cleaver, Adam Rogers and Kenny Werner.  He has also collaborated with Jakob Bro, Dan Tepfer, Jim Black, John Abercrombie, and Masabumi Kikuchi, and he has performed with the Sylvie Courvoisier-Mark Feldman Quartet.
Morgan was featured prominently on the 2017 ECM album Small Town in a duet setting with guitarist Bill Frisell. The album documents a 2016 live performance at the Village Vanguard.
In 2014, Morgan's own trio, featuring keyboardist Pete Rende and drummer Dan Weiss, was reviewed in the New York Times by jazz critic Ben Ratliff, who called Morgan, "a jazz musician whose presence in a recording or a performance almost automatically [makes] it worth your time"

Marc Edwards (born July 23, 1949) is a free jazz drummer who has played and recorded with artists such as Cecil Taylor, Charles Gayle, and David S. Ware. His influences include Charlie Parker and Buddy Rich. He is currently playing with a project with Weasel Walter, and with his own group, Marc Edwards Slipstream Time Travel, an afrofuturistic free jazz ensemble. Many of his solo works have a science fiction theme. He also plays in the band Cellular Chaos, his first foray into rock drumming.