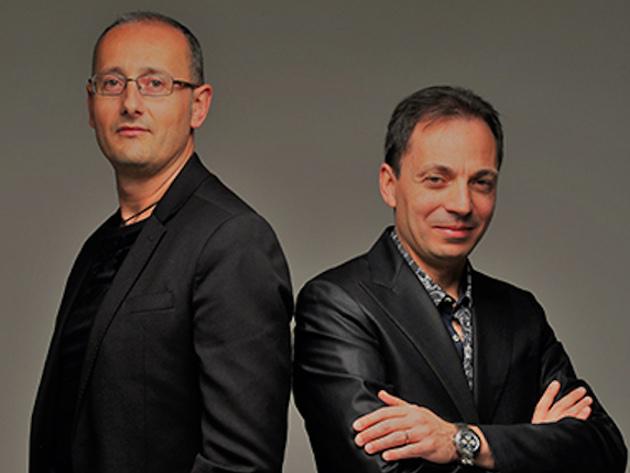 When it comes to the bandoneon it's impossible not to think of Astor Piazzolla, the great virtuoso and father of nuevo tango, whose influence and legacy is still very much felt. Since the late 1990s bandoneonist Gianni Iorio and pianist Pasquale Stafano's Nuevo Tango Ensemble has found inspiration in Piazzola's jazz- inflected tango, releasing a handful of handsome recordings. Their excellent duo outing, Nocturno (Enja Records, 2017), likewise mined Piazzola's songbook, along with those of those of Carlos Gardel, Oswaldo Pugliese, Pedro Laurenz and Horacio Salgàn— tango legends all. Two original compositions pointed to a more personal path, one which they embrace wholeheartedly on Mediterranean Tales.

Passion, romanticism and a bucolic lyricism run through the veins of six originals inspired by the light, landscapes and vibrations of the Mediterranean. Classically trained musicians both, a chamberesque elegance and precision pervades Iorio and Stafano's music, with contrapuntal lines an almost constant feature of their diaolgs. Folkloric and hymnal melodies are also present, woven subtly into the music's seams. And there are elements of tango too, notably in the bandoneon's rhythms. Music has flowed back and forth between Italy and Argentina for over a century, and the hybrid nature of the music here feels totally organic.

There are, inevitably, limits to the duo's timbral range, but these are arrangements which breathe. Lead and comping roles change hands frequently, while melodic motifs flit between individual and unison parts. Pace and intensity subtly oscillate like mini orchestral scores. Improvisation is never far from the surface. Stafano's solos flow with elegance and precision. He stays predominantly in the piano's high register, though the constantly churning rhythms of his left hand imbue livelier tracks like "Secret Sun Dance" with an unmistakable momentum. Iorio's solos, by way of contrast, have an earthier appeal, the bandoneon's darker hues purveying a different kind of passion.

Any discussion about great contemporary bandoneon players should include Iorio. He can make one note sound like a melancholy sigh. On the gorgeous "Nature," the 'breathing' of the bandoneon's bellows conjures the slow lapping of waves, or perhaps a breeze caressing trees. His two-handed, independent melodic lines on "The Dreamer" are captivating. A fine melodist and improvisor, his riffing and percussive touches lend impetus to Stafano's solos. The music's charms, however, are the sum of its parts, and it's in the duo's deep chemistry where the real magic lies.

There's a uniform strength to these compositions, but arguably the pick of the bunch is the episodic "Chacarera Gringa," which at thirteen minutes is the album's longest track. Inspired by a folk dance from northern Argentina, the jaunty rhythms and bracing melodies have echoes of the 19th century Italian protest song "Bella Ciao." The duo saves some of its most uninhibited soloing—in tandem—for this rousing send off.

Mediterranean Tales may stem from specifically Italian-Argentinian roots, but its appeal should be universal. After all, good music, so beautifully played, recognizes no borders. (Ian Patterson, allaboutjazz.com)