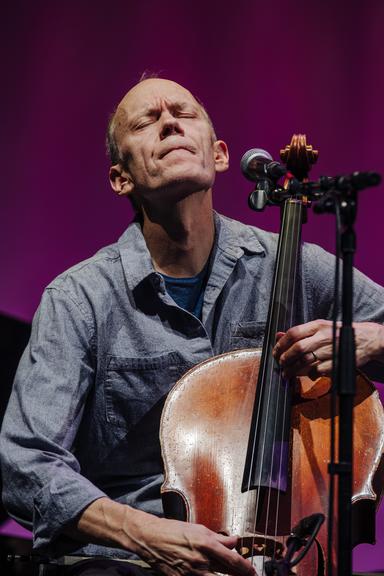 OVER HIS NEARLY FIVE-DECADE CAREER, HANK ROBERTS HAS FORGED A COMPELLING ORIGINAL VOICE AS A CELLIST, VOCALIST AND COMPOSER, ENCOMPASSING JAZZ INFLUENCES, ABSTRACT IMPROVISATION, SOULFUL FOLK MELODIES, INTRICATE NEW-MUSIC COMPOSITIONS AND VIGOROUS ROCK SONGS. HE IS CONSIDERED A MAJOR INNOVATOR AS A CELLIST.

Currently a member of Bill Frisell’s group, Harmony, he has been a regular touring partner and recording artist on many of the celebrated guitarist’s projects since 1985, and was featured on his Grammy award winning recording, Unspeakable.

Roberts has shared stages and recording studios with some of the most celebrated musicians in the world. He’s recorded 10 albums as a leader and co-leader on the ‘Winter & Winter’ label, along with numerable self-released recordings. His 2008 CD Green, with drummer Jim Black and guitarist Marc Ducret, won that year’s German Recording Critics’ Award in the Jazz category.

“There’s a wisdom and patience and catholicity in this record (‘Green’). ‘It’s all one song,’ goes the hip musician’s cliché, but Mr. Roberts walks that walk.” - Ben Ratliff, NY Times

His trio recording, featuring Jacob Sacks and Vinnie Sperrazza, Congeries of Ethereal Phenomenon was released on Newvelle Records in 2019.  His most recent recording with the Hank Roberts Sextet, Science of Love, will be released on Sunnyside Records in July 2021.